Everything Latin is hot and that includes their cocktails! If you haven’t already, it is definitely time to embrace these fantastic libations. Be it Cuba’s Mojitos & Daiquiris or Peru’s famous Pisco Sours. Muddling a traditional Brazilian Caipirinha or Caipirosca & blending up a pitcher of fresh seasonal Batidas. So put on some salsa music, slip into your favorite guayabera, and fire up the grill as you will soon be ready to mix up some of these Latino classics! 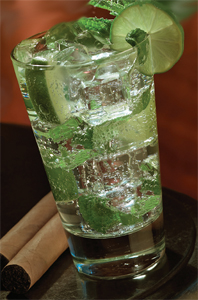 CALLING MR. HEMINGWAY… Daiquiri was purportedly invented in the summer of 1896 by an American engineer, Jennings Cox. The name Daiquiri came from the small East Coast town near Santiago where he lived and worked. In truth, the simple combination of rum, fresh lime juice and sugar must certainly have been consumed by the Cuban populous prior to Mr. Cox’s arrival, but we do love a story… Anyway, “Papa Dobles,” AKA Earnest Hemingway, earned this particular nickname out of his consideration for the overworked bartenders at Cuba’s famed El Flordita bar… apparently he always ordered doubles.

MUDDLE, MUDDLE, MUDDLE… Visitors to South America will recognize the Caipirinha as the national drink of Brazil, one yet to gain broad popularity in the US. Fair enough since it can reasonably be placed within the arena of “force to be reckoned with.” Caipirinha’s are made with cachaca, which translates aptly to “burning water,” a spirit distilled from 100% sugar cane juice, generally un-aged, and recognized for being remarkably intoxicating not to mention somewhat robust on the senses. Although virtually unknown in this country, it is one of the most consumed spirits in the world. Brazil alone boasts some 5,000 different brands of cachaca, representing a combined production of more than one billion liters each year. Annual consumption of Caipirinhas is estimated to be nearly one and a half billion worldwide.

Wash the lime, roll it on a cutting board to loosen the juice, and cut lengthways into quarters. Fill a double old-fashioned glass with ice. In a mixing glass add simple syrup and lime wedges. Muddle to extract juice without forcing the rind from the lime. Dump the ice from the glass into the mixing glass; add the Cachaca and shake. Pour the entire drink into the chilled double old-fashioned glass. Remember, this is one drink where you serve it with the same ice used to shake it.

MIX IT UP with Tony Abou-Ganim’s DVD called Modern Mixology: Making Great Cocktails at Home. Join the Modern Mixologist as he shows you what you need to stock your home bar, tools of the trade and how to use them, and all the secrets behind mixing great drinks at home.