Warmer weather, an influx of tropical fruits and a taste for all things Latin make rum drinks the next wave on the bar scene. 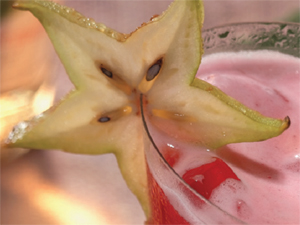 What’s more tropical than rum? It’s a question worth asking, as more and more warm-climate fruits like mango, passion fruit and guava become mainstream American ingredients. With these flavors emerging onto the dining and drinking scene, rum seems perfectly positioned to ride a wave of beverage experimentation.

Not only are these fresh fruits widely available, but there’s a spectrum of syrups, purées and other flavored offshoots – like commercial or house-infused spirits – that have put tropical flavor at the forefront of consumers’ minds. And rum’s natural sweetness and Caribbean origin fuse beautifully with these tropical imports.

Made from sugar cane or molasses rum is a versatile beverage ingredient and, unlike vodka, has plenty of flavor notes of its own. White rums have a moderate flavor and are well-matched in drinks like shaken daiquiris made with lime juice, simple syrup and rum, or even the traditional rum and coke. Dark rums, those aged longer, can stand up to spicier or more intense flavors in beverages.

It also doesn’t hurt that the number of menus – or entire operations – inspired by Caribbean and Central and South American cuisines is growing as well. These operations, looking to connect with the American consumer’s love of all things tropical, have long depended on rum to support and sustain their waving-palm, coconut and thatched-roof imagery, some leaning more heavily on this quintessential New World spirit. After all, connecting “tropical” with “fun” is easy, especially when you consider rum-based drinks like the Cuban, the Mai Tai and the newly favorite Mojito.

“Today, the Mojito, whether it’s made with plain rums or with flavored rums or with different fruits, is ubiquitous,” says culinary consultant Kathy Casey of Kathy Casey Food Studios. “Flavored rums work really well because rum itself has more layers of flavor than the more neutral vodka, so the flavored varieties – if they are good – enhance the rum, and vice versa.”

The basic Mojito, made with light rum, lime, mint, sugar and sparkling water, is being adapted in many ways. Casey makes one using Thai basil, cilantro, coconut and red-chile flakes. Other cocktail creators use raspberries, peaches, fresh mango or other fruits. David Nepove, who trains bar staff and sets up beverage programs as Director of Mixology for the wholesaler Southern Wine and Spirits of California, says mangos and other tropical fruits, when available fresh, can help set a restaurant’s beverage program apart from those of its competitors. Even though there are many flavored rums on the market that possess great flavor profiles and are favored by bartenders, fresh is still best when you want to make a big splash at the bar.

Experimentation doesn’t stop with Mojitos. Audrey Saunders, whose bar, Pegu Club, in Manhattan has quickly become a cocktail destination, likes to tinker with classics, Caribbean or otherwise, and modernize them. Her Lemon Coconut Colada has garnered some well-deserved media attention.

“It’s bright and zingy, simply with the addition of lemon juice and lemon zest, which bring it to life,” says Saunders, describing two qualities that people look for in summer refreshment.

She also experimented with an old rum stand-by, the Dark and Stormy. Her version of the dark-rum-and-ginger-beer combination uses homemade, dry non-carbonated ginger beer in the base, enhanced with Gosling’s rum from Bermuda, lime juice and simple syrup.”This adds extra zing from the homemade ginger beer. It’s one of our top sellers,” she notes.

Caipirinhas could ride the mojito wave to become the next great Latin beverage.

In Brazil, the most popular spirit by far is the homegrown and once homespun Cachaça (pronounced ka-SHA-suh). Cachaça, like rhum agricole from the French Caribbean, is made from fresh sugar cane rather than from molasses. Long considered a cheap, industrial spirit, cachaça has never had much presence in the United States, but with interest in Latin American cocktails exploding over the past five years, some entrepreneurs and producers have been trying to develop smoother and more easily consumed varieties.

The key to cachaça’s success on these shores is the caipirinha (KAY-per-EEN-ya), a simple but refreshing drink made from limes, sugar, ice and cachaça in a recipe somewhat like the original daiquiri. But the caipirinha draws its attraction in that, like a real mojito, the limes, sugar and a little of the spirit are muddled together, causing the crushed limes to release essential oils, making the drink more aromatic, flavorful and sophisticated. Packed with more ice and spirit, the resulting shaken cocktail and varieties made with tropical fruits have garnered fans in cities with significant South American populations.

“About three years ago, after I came back from Brazil, I wanted to do a caipirinha-style martini, but everyone overlooked it for the mojito. Crazy timing, huh?” says Patrick Haight, bar manager at Seattle’s Tini Bigs Lounge. “I truly believe the trend is going to be strong with Latin influences; it just takes a little longer for people to grasp it up in this neck of the woods.”

But you needn’t stick to old standards to take advantage of rum’s festive nature and capture a taste of the tropics. Patrick Haight, bar manager at Seattle martini bar, Tini Bigs Lounge, did some experimentation of his own recently. “We came up with an interesting Manhattan using rum to mark the Seahawks’ being in the Super Bowl. We took our Manhattan, made with Basil Hayden’s bourbon, and instead of vermouth, we used Zaya rum and called it the 12th-Man-Hattan.” The lounge also offers the Ménage à Trois Martini, made with 10 Cane rum, amaretto, blood-orange juice, pineapple juice, fresh lime and lemon juices, topped off with Champagne and garnished with a passion-fruit wheel.

Rum Through The Ages

Rum, says David Wondrich, author and cocktail columnist for Esquire magazine, wasn’t always a cocktail ingredient in America, even though it is considered the first spirit of the country and was heavily consumed from the colonial era on. “Rum cocktails were never very popular; it was more usually used as one of a number of ingredients in punches and grogs.” After Cuban rums became popular in the United States, at the beginning of the 20th century, American mixologists took it in hand to serve drinks like the daiquiri and the Bacardi cocktail.

Rum stands up to zingy ingredients like citrus zest, tropicals and ginger.

Rum’s New Day in the Sun

Pegu Club’s Saunders, who stocks less mainstream rums like Zacapa and Santa Teresa from Central America, El Dorado from Guyana, Rhum Clément and Neisson Reserva from Martinique, says, “We love rum and are playing with it a lot. We turn a lot of guests onto shaken daiquiris and the Floridita #3 [a daiquiri variation with maraschino liqueur] as an alternative to the Cosmopolitan.”

Wondrich notes that the recent emergence of super-premium rums like 10 Cane from Trinidad and Oronoco from Brazil, and the growth of what are called rhum agricoles from Martinique, made with fresh sugar cane rather than molasses, will keep interest in rum-based drinks high.

And sometimes the rum stands alone. This spring at Aspen, another New York hotspot, a premium rum tasting featured a trio of distinctive rums: Starr African Rum, Pyrat XO Reserve Rum and house-infused Pineapple, Ginger and Nutmeg Montecristo 12-year-aged rum. General Manager Holly Roberts explains that serving rum neat and on the rocks is a great way to showcase its range of hues and flavor notes, like the hints of cherry and cardamom in the Starr, the earthy, vegetable notes in the darker Pyrat and the bite and zip of a gingery house infusion.

Ed Hamilton, the self-named Minister of Rum, organizer of the first International Sugar Cane Spirits competition held in March in Ybor City, Fla., and the importer of two rhum agricoles, says these rums are filling a demand among consumers for bigger and better natural flavors in their drinks.

“In the rum industry, we’re seeing more rums from various places – like Martinique – than ever before, and we’re seeing a wider selection of premium rums with a broader flavor spectrum from all over.”

Hamilton says that in Martinique, locals consume their flavorful and robust rums in a drink called ‘ti punch (from the French “petit” – short for an “adorable little punch”), consisting of a glass of rum, a pitcher of water and ice and some sugar cane syrup. Guests mix their own and sip away. At the cane spirits competition, entrants included rums from Guatemala, Venezuela, Nicaragua, Belize, the Dominican Republic, Australia and Africa, among many other regions.