Produced at the oldest operating distillery in America, Applejack is truly a pure, Native American spirit. Laird’s Applejack founder, Robert Laird served under General George Washington in the American Revolution. It has been made by the family in Colts Neck, New Jersey where Robert Laird first registered the company in 1780. Legend has it that the recipe for Laird’s Applejack was first formulated by William Laird, a distiller by trade, who emigrated from Scotland in 1698.Laird’s Applejack is made from tree-ripened apples such as Jonathans, Winesaps, Stamens, Pippins and Delicious from the orchards of the Shenandoah Valley. The apples, which are picked at the peak of the apple harvest, September through November are first pressed into pure juice. It is this sweet apple juice that is then allowed to ferment naturally to convert the sugar into alcohol and produce a hard cider. This cider is than distilled and the fresh distillate is placed in oak barrels to age and become apple brandy. It takes 7,000 pounds of apples to make a single 50 gallon barrel of apple brandy. Applejack is a very unique product as it is not a straight apple brandy but a blend of apple brandy (35%) and neutral spirits (65%) and requires six pounds of apples to make a single bottle. The company is still family run and operated by ninth-generation Lisa Laird Dunn.

This is another drink that was inspired by my childhood memories growing up in Michigan. The trips to the orchard to pick apples with my brother Dave which would find their way into one of my Aunt Dort’s homemade pies. There would always be a warm slice of pie accompanied by a Vernor’s Ginger-Ale float as a reward for our labor in the orchard. It is the combination of all these flavors, in a fortified sort of way that has led to the creation of the Pomme & Circumstance. See, one can find inspiration for a new drink in the craziest places…

Shake ingredients with ice and strain into a glass. Garnish with aplle slices.

Perhaps the best known of all the applejack based cocktails it takes its name from a pink flower called a Jacquemot Rose.

Egg Nog, a rich, spicy, alcoholic beverage used to toast one’s health, is believed to have found its way into the tradition of American holiday merry-making by way of Europe. It is difficult to point to its exact ancestry; however the British of old enjoyed a hot beverage made of eggs and milk curdled with the addition of hot ale or wine called Posset. It is believed that taverns would have served their rich and spicy brew in a small wooden mug called a “noggin.”

An egg based drink in a “noggin”…Its possible. Once in Colonial America, rum, known as “grog,” was both popular and plentiful, thus becoming the basic recipe’s spirit of choice. Now, an egg drink mixed with “grog”… “egg and grog” … “egg nog” … also a possibility. In any case, the general theme of this hearty drink has found its way into many different cultures, each with its own interpretation. There is the Mexican rompope, Peruvian biblia con pisco, Puerto Rican coquito and German biersuppe, to name a few.

The Pumpkin Nog is yet another interpretation of the traditional – a tasty rum based egg nog with a rich, spicy holiday twist. There are so many quality rums from which to choose, however the fresh peach and orange flavors of Southern Comfort really work well with the rich, spicy nature of this nog. Since it’s creation in 1874, M.W. Heron’s secret formula for Southern Comfort has virtually gone unchanged. After originally being served from the barrel, it was first bottled in 1889 with the slogan “None Genuine but Mine,” each bottle signed by founder Heron himself. After the repeal of prohibition in 1934 the label became adorned with the famous Currier & Ives lithograph of the Woodland Plantation, as it remains today.

Although Egg Nog is most popularly associated with the holidays, it is a great drink to mix up and share with your loved ones whenever cooler weather moves the party indoors. This drink came to be out of a desire to make use of an excessive quantity of pumpkin puree – leftovers from one of my Thanksgiving pie making sessions. Aside from appearing on Bellagio’s holiday menu, the Pumpkin Nog was served in 2001 in New York, for the windows of Hope event, benefiting the families tragically affected by that year’s September disaster.

“Christmas is not properly observed unless you brew nog for all comers; everybody calls on everybody else; and each call is celebrated by a solemn egg-nogging…” – An English visitor 1866 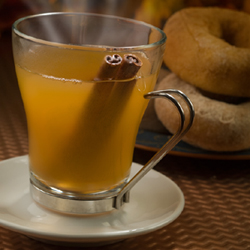 Put ingredients in a jar, cover with Rye, and stand for a fortnight. Strain out spices through fine cloth or filter paper. Put back on fruit until needed.

Start by breaking the cinnamon sticks and cloves and bruising the vanilla bean. Next make a Mirpoix bag with the spices. In a large saucepan combine cider, honey, and Mirpoix bag; bring to a boil and let cool for at least 4 hours. Remove Mirpoix bag and re-heat when ready to serve adding the Rock & Rye at the last moment. Serve in heated mugs with a cinnamon stick garnish.

Whenever I think about hot apple cider I reflect back on my childhood. Dear are the memories of getting tightly bundled up and going out to the apple orchard with mom, dad & kid brother David…leaving behind the smell of a fire burning in the fireplace…the aroma and changing hue of fall time in Michigan…venturing out in the horse drawn wagon under a heavy wool blanket to the barn where the apples were being pressed dry of their juices…having the first sip of steaming hot cider to wash down one or two delectable homemade cinnamon-sugar doughnuts, still warm from the fryer. Despite the passing years, I have never lost my love for hot apple cider and homemade doughnuts – although this cider isn’t for the kids, the doughnuts will certainly be a hit.