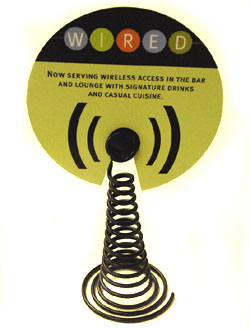 Wi-Fi service is essential in today’s world, but what exactly is it? Created in 1999 by the Wi-Fi Alliance, according to a web definition Wi-Fi is, “a term used for a set of wireless standards for local coverage, also known as 802.11.”

But what does that mean in layman’s terms for our everyday use? If you have a portable electronic device (such as a laptop, blackberry, etc) which has a wireless card, then you have the ability to access Wi-Fi. The other part of the equation is a wireless access point, usually comprised of simply a wireless router. Combine those two components and you have the potential to access the internet. I say potential because often the router has password protection to keep it from being accessed by just anyone. It’s not only possessiveness that prompts these passwords. The more users connected to the internet using the same router, the slower the access speed becomes. With that reason it’s easy to see why private owners would enable passwords. For the businesses that have a wireless access point there’s another important component involved, money. The driving force behind most if not all businesses is to create a profit, hence the password so only paying customers can utilize the service.

According to iPass (a Wi-Fi access provider), “hotspot use is up by 89% globally among business users since the second half of 2006”. US public Wi-Fi usage has increased by 60% since the end of 2006. In the US, free Wi-Fi in coffee shops and hotels is fairly common in most cities. So much so that I would be surprised to visit a coffee shop and not see anyone using a laptop. What may surprise a lot of people is this service is beginning to be offered even in restaurants. From fast food chains to gourmet restaurants, Wi-Fi availability has even spread to where you dine. While some welcome it with open arms, others oppose it for a variety of reasons. How would you feel if your favorite restaurant started providing Wi-Fi?

Some restaurant owners are definitely buying into the idea of Wi-Fi at their establishment(s), and more are getting connected every day. Restaurants with Wi-Fi include 15,000 McDonalds around the globe, 200 of Krystal’s 425 stores and expanding, restaurants in hotels and many more various non chain restaurants. OpenWiFiSpots.com is one of many sites that provide a list of restaurant hotspots in your area. The opportunity to sell more by enticing new customers and prolonging the stay of current customers can pay off especially during traditionally slow periods such as the mid morning and afternoon.

Whether for work or recreational purposes, for many people Wi-Fi is a necessity of life. No wonder they call a Wi-Fi access point a hotspot. According to the Wi-Fi Alliance there are 450 million Wi-Fi users worldwide and 68% of them would rather give up chocolate than go without Wi-Fi. The potential for what Wi-Fi can do for us is tremendous, the increasing number of users is undeniable; other than computers, cell phones and gaming consoles, even digital cameras and music players are starting to be equipped with Wi-Fi abilities. Is your business ready to provide these users with the connectivity they crave? 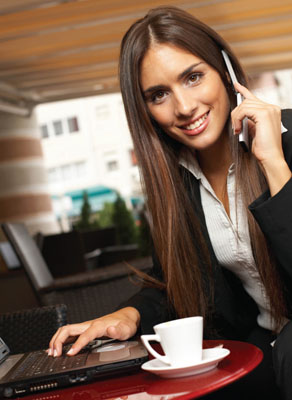 Interstate Hotels and Resorts is “Wired”

Last year the progressive IHR management team, led by Don Stanczak, implemented a plan for their properties to supply Wi-Fi in their bars and dining areas. iMi Agency was asked to come up with the marketing for this roll out. Project Manager, Kimberly Knapik, along with graphic designer, Pauline Pellicer, created and designed the innovative pieces of POS to catch the consumer’s eyes. IHR’s bar and lounge promotion “WIRED” was designed to increase beverage sales by attracting guests from their rooms to the outlets with the availability of wireless connectivity. By doing this the bars and lounges increased their head count and gave the guest a social atmosphere in which to access the internet for business or personal use.

Each hotel was provided with several pieces of collateral to advertise the promotion including:

IN-ROOM DESKTOP TABLE TENT designed in the shape of a small laptop computer. This piece alerted the guest to the availability of wireless access in the bar and lounge. It also featured a beer, spirit and non-alcoholic beverage on the screen to attract all varieties of consumers.

A spiral METAL TABLE STAND displayed on the bar top and cocktail tables with a custom die-cut topper to resemble the universal wireless signal.

MENU INSERTS featuring casual cuisine to enjoy while surfing the internet. A stand alone menu was also provided to those hotels where the dining room is not available for dinner service.

BANNERS were displayed in the lobby or in front of the outlet. These pieces with their stunning graphics and easy visibility attracted patrons from outside the outlet.