The Florida Winefest & Auction Shines at The Ritz-Carlton, Sarasota
Photography By: Hal Crocker and Nancy Suttles 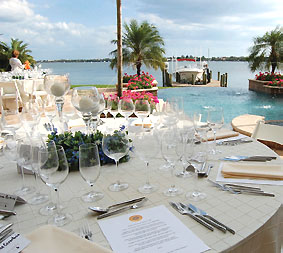 the Florida Winefest and Auction turned 18 at The Ritz-Carlton Sarasota this past April. Like a proud young lady, she turned every head in the city. It was an end of season extravaganza! This four day festival was filled with events to attract wine lovers from all over. Winery after winery and restaurants galore, you were able to get your gastronomic fantasies filled for the summer. 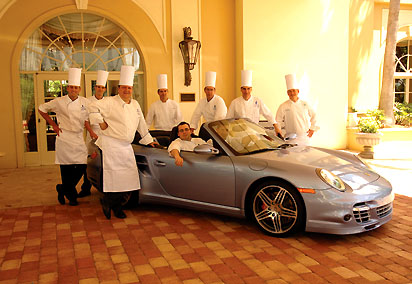 The event started with a tasting for the trade on Thursday morning. Winemakers had the chance to meet the restaurant and hotel customers that mean so much to their business as they tasted the wines. The evening was dedicated to twenty-two wine dinners in locations uniquely spread throughout this charming bayside city. These locations ranged from The Ritz-Carlton to many of the finer resorts and restaurants in town, and on the beaches to beautiful private estates and even the local Porsche dealership showroom, who was one of the sponsors.

the hottest ticket in town

Friday was one of my favorite days at the event. The “Showcase Food and Wine Tasting” brought out the fun, colorful wine fans while local restaurants wooed the crowds with their creations to pair the wines with.

Even the Le Cordon Bleu College of Culinary Arts, Atlanta made a special appearance. But evening is when everything heats up, and the action is at the Winefest Fever Party. Possibly the hottest ticket in town, it gets you a spectacular multi-course dinner created by “The Ritz-Carlton Culinary Dream Team” headed up by Sarasota’s Executive Chef Frederic Morineau, and an evening of top entertainment and dancing.

Guest Chefs Scotty Schwartz and Martial Noguier brought their exceptional culinary talent to the table at this year’s event. Scotty, Executive Chef and Owner of Florida’s famed 29 South in Fernandina Beach created a 8-course feast at an al fresco winemaker dinner on Sarasota Bay. As a member of the Slow Food Movement, Chef Schwartz is passionate about his relationship with local farmers and the procurement of the freshest possible ingredients. 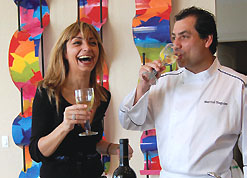 Executive Chef Martial Noguier, is a native Frenchman who boasts credentials that few chefs have ever dreamed possible including time in the kitchens of French masters Alain Ducasse and Jacques Maximin. Presently, Martial is the Executive chef at Chicago’s award-winning restaurant One Sixty Blue. He and his talented wife Lu Lu created an exotic surf and turf

dinner complemented with wines by Wings Winery and Keenan Winery. 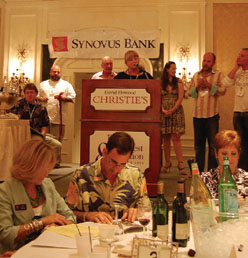 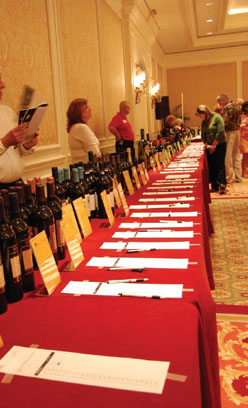 One of the silent auction tables.

The Grand Brunch and Charity Auction was the headline event, with a goal of a half million dollars to support 28 children’s charities. The event has given over six-million dollars to seventy-one charities so far. Now that’s putting good wine to good use! The volunteer driven organization is headed up by Sandy Loevner, President of the Board, Volunteer. Sandy told me, “All the hard work by everyone involved is realized when we award grants to disadvantaged children’s programs on May 28th at a special presentation. That’s the highlight of the event for me.”

As the weekend wound down a “Fiesta Italiano” was held at the local shopping and restaurant Mecca, St. Armands Circle. in the Mix Magazine was proud to be one of the sponsors of this event featuring a concert in the park with Italian tenor Maurice LoMonaco and plenty of wine to be tasted. It was a fitting end to a great event and a closing to the spring season. Cheers, see you all next year!