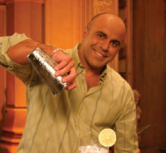 As the season changes and the warm weather subsides, we give way to our Bermuda shorts and Hawaiian shirts for the comfort of warmer apparel such as corduroy trousers and tweed jackets. Much can be said of what we put into our body as well as on it, hence the switch from the lighter white spirits such as vodka and gin to the richer, more full bodied tipples like whiskey and brandy. Or in other words…the brown stuff.

When we think of Irish Whiskey, we immediately picture a hot, steaming Irish Coffee which is a great warm up in its own right. However, Irish Whiskey is often overlooked when cocktails are being fashioned, which is an unfortunate slight on a wonderfully mixable spirit.

American Whiskey is perhaps the foundation to more great classics that help to take the chill off than any other category. Consisting of Bourbon, Rye and Tennessee whiskies, these fabulous spirits have brought us the Manhattan, Sazerac and the Old Fashioned. Here I am featuring a unique single barrel whiskey from Jack Daniel’s to make my Tennessee Highball.

Rum is perhaps the most versatile spirit category when it comes to preparing cocktails. Ranging from light bodied white rums, perfect for summer’s Mojitos, to rich, full-bodied rums, great with tropical fruits and juices, to complex rums with layers of ﬂavor perfect for my Fenberry Cobbler. 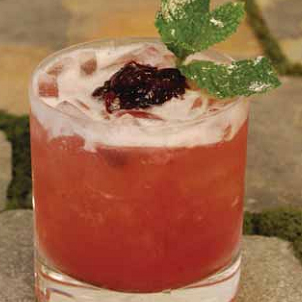 *TO MAKE CRANBERRY COMPOTE: In a 4 quart sauce pan bring ½ cup each of water & freshly squeezed orange juice with 4 whole Star Anise to a boil. Stir in 1 cup of sugar. Add a 12 ounce bag of cranberries. Return to a boil. Reduce heat and let simmer for 10-12 minutes, cranberries should pop. Remove from heat and allow to cool. Dump the entire mixture into a glass bowl, cover and refrigerate until needed.

Legend has it that Harry MacElhone created the Sidecar for an Army Colonel who arrived at his bar in a chauffeur driven sidecar of a motorcycle. He would make the good Colonel his cognac based Sidecar to help warm him from his ride. I created the Cable Car at Harry Denton’s Starlight Room in San Francisco featuring a rich, spiced rum from Puerto Rico. Anyone who has taken a Cable Car ride knows that a little warmth is also appreciated at the end of the journey. Cheers!