It is said to be among the oldest cultivated tree in the world. Olives have been found in Egyptian tombs from 2000 years BC. In California,  the Franciscan missionaries planted olive groves on their journeys throughout the state in the late 1700s, setting the tone for many  of today’s orchards. 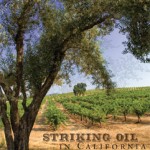 Many names come up when talking about the modern olive oil business, but certainly a lot of credit goes to Lila Jaeger. Lila was one of the founders of the COOC (California Olive Oil Council) and helped revitalize the California industry. As the story goes, she discovered abandoned 100 year old olive trees on her then Rutherford Hill Winery in Napa Valley. She then set out to learn about olive oil production, lovingly restored the trees and produced her first olive oil in 1991. A mere 15 cases were made. She traveled Europe, learning about the production of world-class olive oil, and collected and imported rootstocks from these trips which are now components of the award winning Napa Valley Jaeger Family Estate EVO oil. In 1996 Lila, together with 12 other producers, started their own cooperative olive mill in the European tradition. Today all of their oil is still pressed at that facility each November. Lila passed away in 2002, leaving the trade to her very capable daughter-in-law, Kris Jaeger, who carries on the tradition with her children and orchard manager, Salvador Ramos.

Another very interesting olive oil personality, and one I have had the pleasure of working with many times, is Bruce Cohn. He produced one of the first olive oils in Sonoma County in nearly a century. Bruce is one of the 1990’s pioneers who brought about the renaissance in California olive oil.  His home on the Sonoma Valley estate vineyard, known as “Olive Hill”, has 140-year old Picholine trees, imported from France, that populate the property. Bruce began pressing the unique olives, inspiring a California olive oil renaissance, leading the way for California olive oil to be recognized as a world-class offering. As if managing The Doobie Brothers for over 30 years and starting the B.R. Cohn Estate Winery in 1984 didn’t keep Bruce busy enough, a new family business was inadvertently born. B.R. Cohn’s Picholine Extra Virgin Olive Oil is considered to be one of California’s finest.

To get an idea of how many producers of olive oil there are in California, just go to www.oliveoilsource.com. The list seems endless and reads like a fine wine list: Phil Woodward of Chalone Vineyards, who has a long history of oil production; Ferrari-Carano; Benziger; Gloria Ferrer; and Iron Horse. Araujo Estates, with more than 400 old olive trees of Spanish varieties growing on the property planted in the late 1800s and early 1900s, along with an additional 160 French varietal trees, make wonderful oils. The Michael Mondavi Family makes an extra virgin olive oil under the Foliage label. It is an estate grown, cold pressed oil inspired by the beautiful oils of Tuscany. The list goes on and on… Many of the best oils are, of course, produced by non-winery orchards, including Modesto’s Sciabica family, which has been making olive oil since 1936. The family settled in Modesto in 1925 to grow grapes for winemakers and 11 years later moved into the olive oil business. It was not until the late 80’s that they began pressing olives by variety and season, keeping the varietal separate all the way to the bottle. They then began to offer varietal olive oils under the Sciabica’s label. www.sciabica.com.

Ridgely Evers is another name that comes up when discussing California olive oil. The creator of the small business accounting system QuickBooks, has spent at least a small part of his fortune in trying to recreate a Tuscan olive oil from imported trees, and by all the reviews has done a good job at it. It has been a quarter century since he and his wife bought Olive Ridge Ranch. Today it is a multi-crop farm producing many different products. Look for his oil under the DaVero label. You may also want to view their website at www.Davero.com. There are some great recipes and plenty of information for the oil curious. 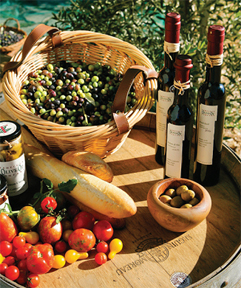 Another quality producer is the Temecula Olive Oil Company. Making oil since 2001, they are committed to using only 100% California fruit of the highest quality and never use chemical or heat treatments of any kind. They practice sustainable agriculture, growing and harvesting a wide variety of olives, which they carefully hand-press using traditional methods to produce full, fresh, flavorful 100% extra virgin olive oil. These products are being distributed by Trellis Wine Group to national accounts in a new and creative way. www.Temeculaoliveoil.com

Heiress of the San Francisco Chronicle fortune, Nan McEvoy, is another entrepreneur investing in oil. Now well into her 80’s, she originally imported and planted trees from Tuscany and now owns over 18,000 trees covering 80 acres. She is rumored to have spent $20 million on all the trimmings that come with first class olive production of her McEvoy Ranch oils. www.McEvoyranch.com