Ernest Hemingway was not only a great writer, bull fighting aficionado, big game hunter and sport fisherman but he was also a notoriously famous imbiber. I think that’s why I am such a big fan of his. In the Cuba section of his wonderful novel, Islands in the Stream, Thomas Hudson describes the daiquiris at the Floridita. “He was drinking another of the frozen daiquiris with no sugar in it and as he lifted it, heavy and the glass frost-rimmed, he looked at the clear part below the frapped top and it reminded him of the sea.  The frapped part of the drink was like the wake of a ship…” the man could write. 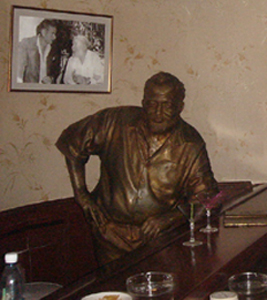 Inspired by Mr. Hemingway, my dear friend George, a true gentleman who fancies himself a bit of a Bon Vivant and very much enjoys imbibing well crafted cocktails, embarked on a trip to Havana, Cuba, in search of Hemingway’s favorite haunts. George first visited the El Floridita where he found himself face to face with a life-size, bronze statue of the great writer, occupying his regular barstool. Well, when placed in such a situation what’s a man to do but order a Daiquiri or two?

When asked how he liked them George replied, “Although frozen, they were made with fresh lime juice and Havana Club Rum with just the right amount of sugar…simply perfect!” It was here at the El Floridita that bartender, Constantino Ribalaigua Vert brought the Daiquiri to “Classic” status, as well as serving Hemingway his infamous “Papa Doble,” a frozen Daiquiri with a double portion of rum and no sugar. 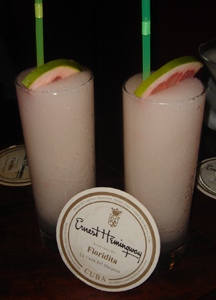 He is also famous for the creation of the “Hemingway Daiquiri,” made with rum, maraschino liqueur, fresh lime and grapefruit juices. George also tried a Hemingway Daiquiri, which was also served frozen, and although he enjoyed it, he professed to like my version better. 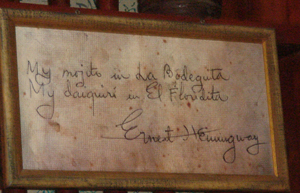 Next stop, La Bodeguita del Medio (the little shop in the middle), a local bar—rather shrine—frequented by thousands of curious tourists each year yearning to experience firsthand the magical Cuban elixir, Mojito. This is where legend has it that Hemingway came to drink the famous tipple and a sign on the wall in the great man’s own writing seems to confirm  it, “‘Mi Mojito En La Bodeguita, Mi Daiquiri En El Floridita.”

As George sat at the bar watching the guayabera-clad barman prepare rows of Mojitos, carefully muddling the mint, lime and sugar, adding the Havana Club Rum and topping with sparkling soda, he couldn’t help noticing that all the walls were covered with signatures from famous visitors and tourists alike. He ordered a plate of frijoles negros dormidos and roast pork to accompany his Mojito and listened to the local musicians playing Cuban songs. George had one more Mojito, reflected on what a different time it was when Hemingway drank here, tipped the band and signed the wall for posterity.

In a mixing glass add rum, fresh lime juice and simple syrup; shake with ice until well blended.
Strain into a chilled cocktail glass. Garnish with a thin wheel of lime, floating.