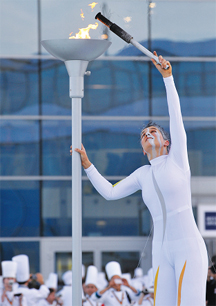 Five chefs and an assistant chef from the Delaware North Companies competed in this edition of The Culinary Olympics.

The Culinary Olympics, Internationale Kochkunst Ausstellung or IKA, are held every four years in Erfurt, Germany, and are considered one of the most prestigious international cooking contests. Last year’s event was October 19-22, 2008. It was first conceived in 1896 when the first competition included four nations competing in a local cooking contest at the Frank-furt fairgrounds. In 2008, teams from 53 nations competed in a dozen categories over four days. The chefs were coached by Roland Henin, Delaware North’s Corporate Chef and chief culinary ambassador. Henin, one of only 60 or so American Culinary Federation-Certified Master Chefs in the United States, is a highly regarded culinarian with significant coaching experience at the international level. He led the American national team to a gold medal in the 1992 Culinary World Cup and is currently the coach of the American team that competed in the Bocuse d’Or in Lyon, France, in January. 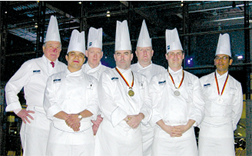 The team of chefs and their awards:

Jeremy Jacobs Jr., executive vice president of Delaware North and the force behind the company’s campaign to be the most respected culinary company in the world, described the chefs’ accomplishments as “phenomenal” after the final awards ceremony. The road to the Olympics is just one in a series of efforts Delaware North undertook several years ago to demonstrate its expertise in every manner of food service. The company established the sports concessions industry nearly a century ago, and is oftentimes more closely identified with casual fare than it is with high-end cuisine. “The fact is, we have incredible culinary talent,” Jacobs said. “And we’re determined to tell that story to our clients and guests.”