A Cookbook by Chef Peter Davis with Alexandra Hall

As the bandwagon of sustainable agriculture, organic eating and “slow food” becomes increasingly filled with diners, home cooks and professional chefs alike, there are a few who have been riding it—and arguably, driving it—for decades. Chef Peter Davis is one of those few, and FRESH & HONEST is a monument to his love of delicious, fresh foods and the New England farmers and producers who supply them.

“FRESH & HONEST is a representation of all things that are important to me as a chef, as a gardener and as a fisherman,” says Davis. “This book pays tribute to the amazing men and women in New England who work day in and day out to bring us the best possible ingredients this area has to offer.”

Davis has been honored by The James Beard Foundation as one of “The Best Hotel Chefs in America,” while Henrietta’s Table was named one of America’s “Best Farm-to-Table” restaurants by Gourmet in October 2007 and was honored for its “Excellence in Sustainable Cuisine” by Santé in 2008. An avid supporter of local businesses, it is no surprise that Davis chose to work with three Boston-based professionals to help bring his vision to life. A partnership with writer Alexandra Hall (editor-in chief of several lifestyle publications produced by The Boston Globe and former Boston Magazine food editor) allows Davis’ true voice to shine through. For this project, Hall interviewed over a dozen New England purveyors and captured each of their stories in sidebars throughout the book. 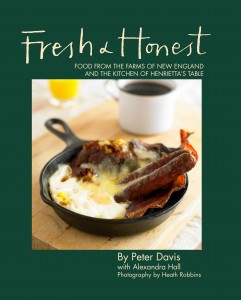 The 218-page, full color cookbook showcases extraordinary food and environmental photography by Heath Robbins, an accomplished food and lifestyle photographer. This past spring, summer and fall, Robbins and Davis worked day after day with food stylist Catrine Kelty, both in the restaurant and on location at sea sides and farms. Pulling the whole project together is Three Bean Press, LLC, a boutique publishing company specializing in children’s and local interest books. Three Bean’s hands-on approach and creative zeal make the publisher a synergetic partner for Davis. FRESH & HONEST is the fourth title for the company.

FRESH & HONEST: A Sampling of Chapters and Recipes

ABOUT HENRIETTA’S TABLE AND THE CHARLES HOTEL 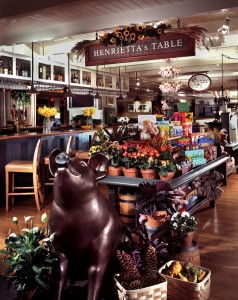 Home to weekly outdoor farmers’ markets and host to several outdoor food festivals, The Charles Hotel brings fresh and honest food indoors at its award-winning restaurant, Henrietta’s Table. The restaurant is a perfect complement to the hotel’s hybrid culture of contemporary energy and awareness, blended with traditional New England style and integrity. Executive Chef Peter Davis uses organic and native ingredients from local producers in and beyond Massachusetts to create an original and simple approach to classic regional cuisine. Davis’ keen awareness of the integrity of food in its natural state, eye for color and instinct for balance of tastes has earned him both local and national critical acclaim. The 138-seat restaurant serves breakfast, lunch and supper seven days a week, 365 days a year. Henrietta’s Table is located in Harvard Square, inside The Charles Hotel, A property of Interstate Hotels and Resorts, One Bennett Street, Cambridge, MA 02138. Reservations can be made by calling 617.661.5005. For more information, visit www.henriettastable.com.