The trend for green and other varieties of tea has returned 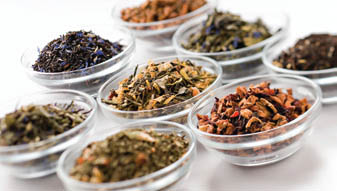 In 1904, on an unseasonably hot day, Richard Blechynden, the then Commissioner of Tea for India and the Director of the East Indian Pavilion of the St. Louis World’s Fair, was unsuccessfully trying to give samples of hot tea to fair-goers. In an attempt to make the product more attractive to attendees who were seeking out the coldest beverages available, he added ice to the samples. Not only was he successful in getting people to try his Indian tea, but that single act garnered him credit for inventing” iced tea.

In fact though, versions of an iced tea drink can be found in cookbooks tracing back to the early 1800’s. The American people of that era preferred their tea (from green leaves, not black) served in a punch form with sugar and lots of alcohol. Eventually as World War II came around and sources for green tea leaves were banned from dealing with the United States, all imported tea (black leaves only) came from India. By the time the war ended, Americans were drinking almost 100% black tea. It wasn’t until recently that the trend for green and other varieties of tea returned.

Today, the American palate can choose between black, green, white, oolong, herbal, and rooibos (red) teas. However, the last two (herbal and rooibos) technically aren’t teas by definition. Herbal and rooibos teas are properly known as infusions because their leaves do not come from the true “tea” plant.

Tea leaves, no matter the “color”, all come from the same plant. That plant is Camellia sinensis, a relative to the flowering camellia known to gardeners. As amazing as it might sound, the few leaves that sprout at the top of this plant, and only this plant, is what is transformed into all types of tea (black, green, white or oolong).

Sounds too improbable to be true? Well, considering this magazine usually spotlights those beverages that are either fermented or distilled, let’s consider a comparison to wine. One species of grape, vitis vinifera, is responsible for nearly all the wine in the world. Surely you wouldn’t mistake a delicate Chardonnay for a robust Pinot Noir or effervescent Champagne.

Like grapes, subtle differences in soil, elevation, and climate all affect the character of tea leaves. A great deal of tea’s character also comes from the choice of leaves picked, and how they are treated or “processed” after they are plucked from the branches. (See box for details.) The amount of time leaves are oxidized, or exposed to air, determines the color and flavor of tea.

Black Tea: After picking, leaves are withered, rolled, and crushed to release oils and flavor, then dried for four hours or more. Black tea usually has a stronger flavor than other tea types.

Green Tea: Leaves are usually not withered but steamed prior to drying to preserve color and antioxidants, then rolled and dried.

White Tea: Leaves are picked before they are fully open, then steamed instead of dried. The leaves are not rolled, which results in a milder flavor and makes white tea the least processed of all.

Oolong Tea: Leaves are withered, rolled and crushed, then dried for only two to three hours.

To become iced tea, one first has to make brewed tea, which if done right is a delicate process (see sidebar). Once the tea is brewed properly, the correct procedure would be to lower the temperature to room temperature and/or chill. If you just add ice to the product at this stage, it will melt and dilute the tea. Once the product has chilled, you can serve over ice. BUT, be sure to either consume all your tea in 8 hours OR be prepared to throw it away. Why? Bacteria growth.

The perils of improper handling

In late 1995, in Ohio, Kentucky and other states, several hundreds of restaurants were found to have dangerously high levels of fecal coliform in their brewed tea and tea brewing equipment. The bacteria levels were high enough to get health officials attention and focus the industry on proper brewing, serving, storing and cleaning procedures as they relate to brewed tea.

Lipton, Tetley and other market leaders responded to the outbreak by immediately educating their sales staff, distributors and customers on proper handling procedures. Within months all talk of the outbreak ceased. But a door had been opened, at least in the foodservice marketplace, to manufacturers of tea concentrates. From 1995 until today, tea concentrates continue to make up the bulk of iced tea offerings in foodservice.

Tea concentrates to the rescue

Simply speaking, an iced tea concentrate is typically brewed tea that has had excess water removed. The concept has been around since 1978 when a product called Redi-tea was manufactured and marketed out of Lubbock, Texas. Redi-tea concentrate was an excellent tasting product, but, it had a limited shelf-life and subsequently was out of business by 1986. The second major player in liquid tea concentrates, Thirs-Tea Corp., started selling their liquid iced tea concentrates in 1982 and still provides quality tea products to the foodservice industry. Why have tea concentrates been so successful over time? Tea concentrates allow the user to “brew on demand”. No longer do you have to wait for the water to boil. You do not even have to time the steeping process. (Did you know ideal steep time for green tea is only 1 ½ to 3 minutes while the ideal steep time for strong black tea is 4 to 5 minutes?)

Liquid concentrates take the guess work, and the labor, out of making iced tea. Plus, you get consistency – each glass of tea is going to look, and (more importantly) is going to taste, like every other glass of tea.

How important is it to have tea as part of your beverage program? Well, consider this – your typical cost per gallon of iced tea, made using a concentrate, should run $0.60 – $0.80 per gallon. Since iced tea is served on ice, you will have roughly 6oz of tea in an 8oz serving, or $0.0287 – $0.0375 of tea cost. It would take over 33 free refills (if you only charged $1.25 per glass with unlimited refills) for you to NOT make money. I have not yet been to a restaurant that charges for tap water (although I am sure that day will come)…but having iced tea (and training your staff to promote an iced tea program) is as close as it gets to selling tap water.

Ray Welch is the owner of RW3 Inc., a Delray Beach, Florida, based brand management and sales organization that specializes in the beverage and hospitality industry. He can be reached by email at ray@rw3inc.com. www.rw3inc.com

How To Brew A Good Cup Of Tea

First, the water is crucial. If your water has a discernable taste (especially one of chlorine), consider using bottled or filtered water. And always start with fresh water because water that’s sitting in your tea kettle or previously boiled becomes deoxygenated and produces flat tasting tea.

Second, watch the temperature. Black tea and herbal infusions need a rolling boil of 212°, while delicate green or white tea is best in steaming or lightly boiling water around 175°. Oolong tea will be fine in temperatures anywhere in between.

Another important task is to measure with care. If you add too many (or too few) tea leaves, it won’t taste quite right. One slightly heaped teaspoon of loose tea per cup is recommended.

And finally, keep tea leaves fresh by storing them in dry, airtight packages. Without the protective packaging, tea will lose its flavor quickly.