Brought to you by: IWSR Drinks Record – April 2009

Although the global gin market continues to struggle, there are reasons for optimism. The IWSR Drinks Record editor Alexander Smith reports

Between 2003 and 2007, the global gin market declined by an average of 4.7% a year to 45.5m nine-litre cases, according to The IWSR. That decline has been fairly broad-based, with four of the top five largest gin markets posting falls. Preliminary indications are that this trend continued in 2008. What was particularly discouraging was that the premiumisation trend, so apparent in other white spirits categories such as vodka and tequila, has been far less evident in gin. 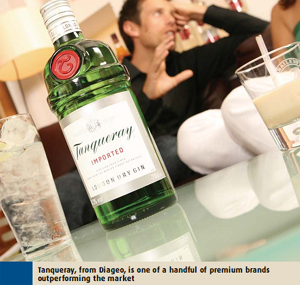 Leading Markets The global gin market can be divided into several sub-groups. In the UK and the Commonwealth countries of Australia, New Zealand and South Africa, the traditional early evening gin and tonic is still a key driver of consumption. In North America, there is also a lot of gin and tonic consumption; gin and juice is popular among African Americans, however, partly driven by its hip hop music associations.

Then there are a whole other cluster of markets in the southern Mediterranean belt – Greece, Italy and Spain – where gin is seen as a lighter spirit that is typically consumed later in the evening, perhaps as a refreshing change after drinking brown spirits. There are also the very low-priced vast markets such as the Philippines and India.

Just three markets, however, provide international producers with the bulk of sales: the USA, Spain and the UK. These countries have all been particularly hard hit by the global economic crisis, and thus, the gin category seems particularly exposed. Hendrick’s Gin global brand manager Nick Williamson says: “Those three markets account for a good share of the world’s premium and super-premium gin consumption. Like most other gin producers, we are heavily focused on those three markets. You could not pick three worse markets in terms of the economy. They are all really suffering.”

Identity crisis in the US Gin faces varying challenges and opportunities in each of these market clusters. In the key US market, where the category has witnessed a steady decline, gin is suffering from an identity crisis; according to Diageo gin company global brand director Shivaun Lucey. She explains that, for a long time, gin was the definitive white spirit in the US. In fact, many of the classic cocktails, such as the Martini, were originally made with gin. Then gin was eclipsed by the tremendous growth in vodka.

“What happened is that a lot of gins started trying to compete and be like vodka, as opposed to being proud of what gin was about, which is great depth of flavour and richness, whereas vodka is distilled to be the ideal mixable spirit. Our view is that we will eventually be able to take back the role as the definitive white spirit, if we focus on what we are good at – and that is taste, the intrinsic aspect about gin.”

Premiumisation has been the overriding trend for the liquor industry in the US, although the economic crisis has led to some slowing of that trend. Gin has been somewhat less successful than vodka in tapping into this consumer trading-up in recent years. The premium-and-above segment has enjoyed years of slow, but solid growth in the US. What hasn’t happened is the kind of explosive growth witnessed in other sectors, such as tequila and vodka. That is despite a lot of new brands coming into the market.

This trend is supported by recent data released by the Distilled Spirits Council of the US (DISCUS). Gin’s premium [what DISCUS terms ‘high-end’] sales amounted to $295m in 2008, compared with $1.47bn for vodka. At the super-premium end, the differential was even greater with gin sales of $13m, a rise of 49% over 2007, compared with $899m for vodka.

Lucey says: “In North America, gin has been declining and you are seeing a lot of decrease in the lower-priced tiers of gin, whereas the premium sector of the gin market is in growth. Gin’s natural home is status and discernment. It is more about knowledge than a higher burst of energy. For consumers, it is about a slower discovery of premium gins.” She says that, taken from that standpoint, gin is more comparable with Scotch whisky.

However, Lucey believes that gin will never match vodka in terms of new product activity or energy. “With vodka, there is a higher proliferation of new products. There seems to be a new premium-plus vodka every week. There are fewer gin houses, so when a new premium-plus variant comes out, there is great excitement. You get a very interesting reception from top-end bartenders and specialists who know their gin, but the top-end of gin will get as much consumer excitement at the moment as vodka will.”

Brand director for Beefeater Nick Blacknell says: “There has undoubtedly been a past lack of excitement in the category. In the last decade, only Hendrick’s and Bombay Sapphire have come along and really added any excitement to the category. If you think about the raft of new tequila brands coming onto the market, with all different age profiles and the complete blitz of vodka, then gin has really lagged behind. It has lacked the dynamism and innovation of other categories.”