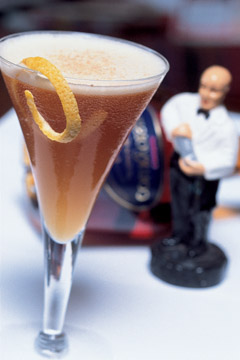 This recipe, which Dale created in 1999, to honor the coming of the new millennium, appears in his book,“The Essential Cocktail”   (Random House 2009)

In 1999, more than a hundred years after Byron published his version of the East India Cocktail and fifty years after a guy named Bill Kelly published his in a book called The Roving Bartender, I decided to reinvent the East India. I called it the Millennium Cocktail, in honor of the upcoming turn of the calendar and for the Millennium bottling by Courvoisier, who had hired me to create a drink for the special product. It was quite a bit juicier than the earlier versions, and had the additional garnishes of freshly grated nutmeg and a flamed orange peel. Soon after my genius invention, I learned of the prior versions, and I sheepishly acknowledged that I was not, after all, the inventor of this exceptional drink.

Combine the cognac, Curaçao, pineapple juice, and bitters with ice, and shake. Strain into a chilled cocktail glass and garnish by flaming the orange peel over the top of the drink and dusting with freshly grated nutmeg.