Tales of The Cocktail’s official cocktail of 2009

“The Mint Julep was the drink that put American mixology on the map, the thing that foreigners pointed to when they wanted to say something nice about the rough-and-tumble new nation on the western shore of the Atlantic. And originally, like most American inventions, it allowed for plenty of individuality and improvisation. With this contest, the Julep is back,” says author and cocktail historian David Wondrich. 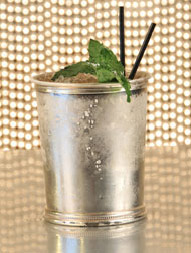 Maksym’s cocktail will be served throughout Tales of the Cocktail, July 8-12 and will be featured in the summer issue of Culinary Concierge Magazine and on CocktailTimes.com.

Tales of the Cocktail has also collaborated with The Liquid Muse Virgin Mixology and Fre Alcohol Removed Wines to offer the festival’s second annual official non-alcoholic cocktail, which is also a Julep. The Sassy Southern Belle will be the official nonalcoholic cocktail of Tales of the Cocktail and will be served at several of their signature events.