Brought to you by: IWSR Drinks Record – September 2009

Vodka continues to gain across the Americas despite the economic slump. The IWSR Drinks Record editor Alexander Smith reports 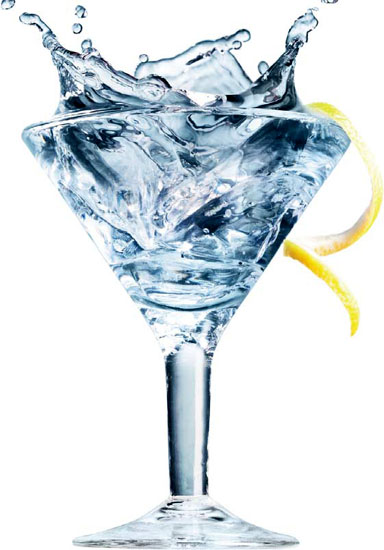 The Americas is the second-largest region for vodka consumption after Europe, with 13.5% of the 513m-case global market. The US is by far the region’s largest market, accounting for some 80% of vodka consumption in the Americas, and 10.8% of global consumption. In 2008, the US vodka market grew by 4% to reach 55.2m nine-litre cases. This growth is below the market’s five-year compound annual growth rate (CAGR) of 5.5% and one of the slowest growth rates for several years. That the category should have slowed down is not surprising, given the overall market slowdown in the on-trade in the last two to three months of 2008, as well as the marked shift to home consumption. Imported vodkas continue to outpace locally-produced vodkas, rising by 5.8% versus 3.1%, although, in both segments, there are strong-performing brands.

Last year saw a marked change in the recent trends of individual quality segments. Super-premium vodkas, those priced over $27.50, grew by just 2.4% – a fraction of the past five-year growth of 17.1%. This is a direct consequence of the economic slowdown, which has had an impact on the segment in two ways. Firstly, people are going out less and consuming fewer cocktails, or are trading down to cheaper categories or drinks. Secondly, the price differential of super-premium vodkas is much starker across a bottle in retail than for an individual cocktail in the on-trade. Consumers buying for at-home drinking have less need to choose premium labels to conspicuously impress, so they have simply traded-down when drinking at home.

This trading down has seen a marked rise in those brands representing value in the standard and low-priced segments. Consumers have tended to gravitate towards brands that are either safe and familiar or offer a perceived quality at a very good price; several brands have benefited from this
trend. Smirnoff posted an impressive performance given its size, outperforming the market and growing by 4.9%. It still accounts for 17.7% of the US vodka category, with volumes a little under 9.8m cases.

The star performers in terms of percentage growth are the new-wave vodkas. Constellation’s Svedka vodka, purchased in 2007, continued to soar. In 2008, volume grew a further 34.1%, representing a gain of over 500,000 cases.

The brand now sells over 2m cases and is among the top five vodka brands in the US – a remarkable performance.

Other brands doing well include Three Olives, which has been heavily promoted on price, but which now tops 1m cases, a growth of 29.4% on 2007. The brand is also strong in flavours. Pinnacle, from White Rock, posted a 154.2% growth to reach well over 500,000 cases. And Sobieski, the fastest-growing major brand, added 205,000 cases and grew by over 400%. What is different about these brands is their relatively low retail price compared to recent successes in the vodka category. Svedka, Pinnacle and Sobieski are all positioned around the Smirnoff price range of $11-$13, although Three Olives is price-positioned more around the Absolut level of $20. 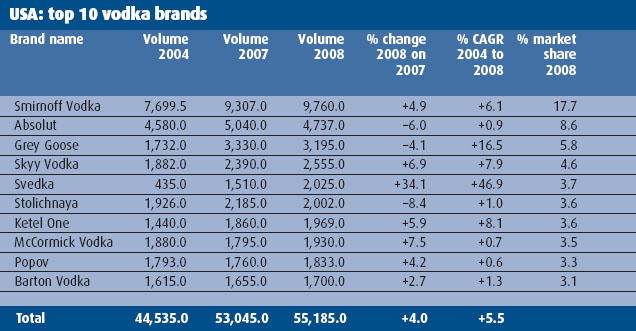 Finlandia Vodka (Brown-Forman) US brand manager Nick Nelson says: “The poor economy has affected the vodka category as the performance of the super-premium and premium brands – Grey Goose, Absolut and Stolichnaya – has softened, while the popular priced and value brands – Skyy, Svedka and Sobieski – are seeing strong growth. This would be a strong indicator that consumers are trading down significantly.”

Davide Campari-Milano group marketing director Cesare Vandini says: “The premium category, where Skyy is positioned, is benefiting from some trading-down from the super-premiums. The segment is doing well, but Skyy is significantly outperforming the segment. We are currently gaining share.”

It is not just the standard sector that has benefited from this trading-down trend. Several value brands have posted strong growth. Key among the major brands are McCormick’s vodka (+7.5%), Diageo’s Popov (+4.1%), and Heaven Hill’s Burnett’s (+15%).

Some of the key imported brands suffered from a change in ownership in 2008. Prime among these is Absolut. Volumes are hard to really pin down, as the brand fell between separate owners, but it seems possible that it declined in 2008, perhaps by as much as 6%, although new owner Pernod Ricard claims a much more stable level of sales. The true picture will only really become clear in 2010.

It was not just Absolut that suffered from the uncertainty surrounding ownership. The Absolut Company CEO Ketil Eriksen says: “In the US, there has been a big downturn in the on-trade. Absolut has a huge on-trade business. We are also seeing a reduction in the promotional activity which Future Brands previously engaged in. We are walking away from a lot of the discounting deals in which many of our competitors are still involved. De-stocking is also a big and ongoing issue.”

Stolichnaya, which languished in the Pernod Ricard portfolio until late in the year, suffered as well, and sales are estimated to have dropped by around 8% – although the brand now seems poised for a bounceback under the distribution of William Grant & Sons.

Ketel One was another brand in transition, distribution network in June. Ketel One global brand
director Peter Fairbrother says the integration has gone smoothly. “We said that, for year one, a great result would be to transition the brand into the Diageo business and not lose share with a minimum of disruption. What we’ve seen at the end of the first year’s trading is that we’ve transitioned the brand with no disruption to the business, and we’ve built and continued to build growth drivers for the brand. We’re in a strong position sitting at the end of year one. The transition was undertaken in a very tough environment.”

He adds: “We are seeing a lot of tradingdown, especially in the more off-tradedominated markets, such as the US. Smirnoff is certainly benefiting from a bit of tradingdown. Ketel One is quite an on-trade-focused brand, so one of the things we’ve rushed to shore up, when we saw this movement, was that our off-premise offering was as strong as our on-trade offering and we’ve seen a bit of a shift out of the on-trade and into the offtrade sector.”

While there seems to have been clear trading-down, not all super-premium brands have been affected. Diageo’s Círoc has exploded into growth, following the tie-up with the marketing company of rap music star Sean ‘P Diddy’ Combs. Volumes have more than tripled in 2008 and the brand is closing in fast on Belvedere as the second-largest super-premium imported vodka brand.

Diageo chief marketing officer Andy Fennell says: “We have been blown away by the degree of growth. We were very confident about the partnership, but 300% year-on-year growth really exceeded our expectations. Prior to that partnership, we were doing what many super-premium brand owners do slowly seeding it and gradually gathering distribution. It was a long, slow build and then suddenly, the brand exploded.”

This growth has forced Moët Hennessy to rethink its approach to Belvedere and it is no coincidence that the brand has repositioned itself to appeal much more to younger, urban consumers. Moët Hennessy has launched two new Belvedere variants. Ultra-premium Belvedere IX vodka (pronounced ‘One-X’) has been created exclusively for the nightclub scene. The bottle (RRP $82) and advertising is much more geared towards ‘lifestyle’ than the production process. Belvedere Black Raspberry Maceration (40% abv) is targeted at the growing market for flavours. The brand will sell for $50 RRP per 70cl bottle.

Another brand to watch could be Patrón’s recently launched ultra-premium Ultimat vodka brand. Patrón COO John McDonald says: “Even in difficult economic times, consumers are still looking for new and interesting brands, especially in the spirits category. For big-ticket luxury items, maybe they’re less willing to experiment with untried brands, but trying a new spirit or a new cocktail is an affordable luxury.”

He adds: “We’re continuing to spend at healthy levels on marketing. We will spend about $10m in advertising for Ultimat this year, which gives distributors and consumers confidence to support our brands.”

This year is likely to deliver more of the same. The recession is forcing consumers from the on to the off-trade and home consumption. As this happens, consumers will continue to trade down to lower-priced brands. This will see some gravitate towards well-known, heavily marketed comfort brands, such as Smirnoff. Meanwhile, others will trade down to lower-priced brands that offer something different, but authentic and premium in image, if not in price, such as Svedka, Pinnacle and Sobieski. The category is likely to continue to post growth, given the fundamental growth in consumer numbers, the attraction of vodka in cocktails and its neutrality of taste. For these reasons, The IWSR is forecasting growth of 3.2%.

Within the vodka category, flavoured vodkas continue to be a key driver of growth, with volumes rising by 5.3% versus 3.9% for clear vodkas. However, it is worth noting that 2008 was one of the slowest in terms of product innovation and new product launches and that, overall, the percentage growth of flavoured vodkas was well below the longerterm growth rates. Over the past five years, the flavoured sector has grown at a CAGR of 9.3% and over the past decade, the sector has grown at a CAGR of 18.7%.

One notable exception to this is the strength of Skyy Infusions, which have performed well in 2008 and are reputedly doing even better in 2009.

Launched in April 2008 by Skyy Spirits (Campari), the success of Skyy Infusions shows there is still room for well-conceived flavour ideas. Davide Campari-Milano group marketing director Cesare Vandini says: “The introduction of infusions has been a major element of Skyy’s success. The use of natural fruit created a significant point of difference in a busy and crowded category – something that is not easy to achieve.”