I was delighted by a dual invitation…one for dinner at the James Beard House in New York and a second for dinner at the Charlotte Marriott City Center in North Carolina. Both dining experiences being prepared by the sensational culinary team at Savannah Red, the “New South, Old Fine Dining” signature restaurant at the Charlotte Marriott City Center. 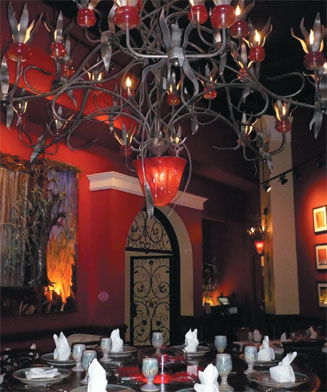 The first stop was NYC where amidst charming company I was first introduced to both The House (The James Beard House, of course) and the artistically addictive presentations of Chef Marechal and his team. As if dining in THE House was not enough, every course delighted us with innovative twists to Southern style cuisine. Each plate gave us a new perspective, a new pairing and a new favorite! Too hard to choose just one… the corn and okra salsa on a pancetta crisp (Savannah Red actually makes their own pancetta in-house!) and the jumbo lump crab hoecake with pickled jalapenos are probably my top two…though the Kurobuta pork belly with Anson Mills grit fries were to die for. Each course was spectacular and paired with a beautiful wine from Diageo. The dinner, the company, the experience…all fabulous!

The next stop…a few weeks later…Charlotte, North Carolina. Again amidst charming company I dined with Mr. Jim Diehl, the hotel’s General Manager and Mr. Gary Oikemus, the Assistant General Manager. Upon entering Savannah Red I felt a bit like Alice…as in Wonderland…as though I had slipped through a secret portal that had taken me to a very magical place. The room is awash in all things Red. Walking through a custom iron gate, I immediately think I am walking into the set of “In the Garden of Good and Evil.” A tiny space only seating 26, but containing an enormous chandelier, sconces and a water feature of two Live Oak trees constructed in metal by artist Henry Harvey. The sculpture is so spectacular that its image was used as the cover of a book. The focus table sits in the center of the room and was conceived by Diehl and Oikemus to be visually congruent to sitting at a campfire with the center of the table being a flickering silk flame reflecting through red art glass. Fire and water dominate the feel but the mood is somehow serene and makes you feel warm and relaxed. The pottery place settings are works of art. Each charger plate and water chalice is handmade and signed by a potter named Geoffrey Lloyd from Raleigh. All of these points of interest make for interesting space but would be nullified if the food and service weren’t an equal…alas I was even more excited as the food and wine made its debut. 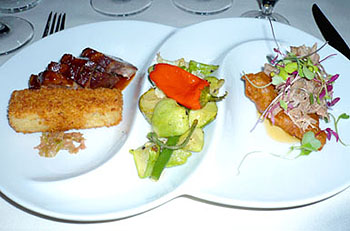 The food is masterfully prepared by Chef Marechal’s right hand man, Sous Chef Jason Gray and his deputy, Chef du Cuisine Billy Brown. Starting off with a quad appetizer of Lobster Cobbler, brandy-scented lobster etouffee in a phyllo cup with saffron and chive, Diver Scallops, seared over mustard greens and a red pepper gastrique, Jumbo Crab Cake with sweet potato chutney and anchovy remoulade and Mini Beef Short Rib over pumpkin risotto was a meal in itself but we were only getting started. I would be remiss if I did not mention the superb wine list of over 300 bottles and having six members of the staff being certified sommeliers. I also had a beautiful bottle of B. R. Cohn Chardonnay recommended to start with our appetizer course that matched perfectly with the food. We continued our gastronomic feast with successive courses of she-crab bisque, Savannah Bleu salad with a wild berry vinaigrette, and a selection of entrees including a perfectly cooked beef tenderloin that was pan seared and served with a butter-basted lobster timbale and brussel sprouts complemented by blueberry stilton and port wine buerre rouge and their signature dish called “New South” Shrimp and Grits which adds scallops, creamy Anson Mills grits and a spicy Tasso gravy. 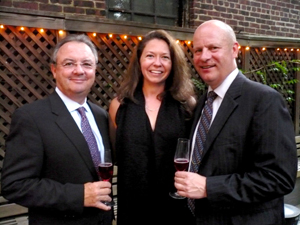 We finished off with a spectacular signature dessert “Krispy Kreme” Bread Pudding that was flambéed tableside and topped with crème anglaise and a Maker’s Mark bourbon sauce. All of this while drinking a superb Pinot Noir from New Zealand named Amisfield and a huge Merlot from Napa called Bravante made for incredible dining and certainly not what you would expect from a small restaurant and wine bar in a chain hotel in the middle of Charlotte. I can easily see why The James Beard Foundation declared Savannah Red “the boldest food in Charlotte.”

Great food and service in a sexy environment with people who are fanatically passionate about all things food and beverage; what more could you ask for? As I was exiting my portal and coming back to reality, my eyes surveyed the lobby of the hotel and I was told that “my journey” wasn’t complete until we went into Cutter’s Cigar bar for after dinner drinks and amusement, but that, my friends, will be a fantasy story for another time.