A revival is underway in the business of American spirits. Small batch and hand-crafted spirits are back. The advent of boutique wineries, micro-breweries and even the demand for artisanal breads made with heirloom grains certainly all did their part to stoke the fires under the pot stills. However, this rebirth of quality, innovation and utilization of local products, more than anything, was borne out of the modern-day sustainable agriculture movement and consumer’s desire to add drinking-local to their eating-local philosophies.

The history of distilling in America is intertwined with the history of its politics and laws, its people and its culture – right from the birth of our nation.

Grains quickly became a staple crop in the new world. Many of the Colonists in the seventeenth and eighteenth-centuries had emigrated from countries with long histories in wine-making, brewing and distilling, fortunately they were also skilled in growing grains, especially rye, barley, corn and wheat (the heart of spirits). But, on the frontiers of the still-expanding colonies, it was difficult to get excess grains to market over scarce or nonexistent roads. Enter distilling: Once fermented and distilled, grains were much more stable and easier to manage and to transport. A packhorse could carry 4 bushels of rye but if that grain was made into whiskey that horse could transport the equivalent of 24 bushels. Whiskey could also be traded or used as payment to buy supplies, equipment, even land. It was, in essence, liquid gold.

But to really look at the beginning of hand-crafted or artisanal, small-batch distilling in America you would have to go back a bit. Even though commercial distilling in America dates all the way back to the mid 1600’s the theme of the day was quantity not quality (from 1760 to 1775 up to 12 million gallons of rum were produced in Southern New England alone). Furthermore, during the early 1700’s when most every farmer owned and operated a small pot still, it was out of economic practicality and not in an effort to produce the highest quality quaff. 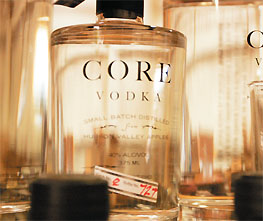 Harvest Spirits is located on a third generation Hudson Valley fruit farm. The distillery is housed in a converted cold storage room that was used to keep apples year round.

The real turning-point – where the art of crafting began – was in the last years of the eighteenth-century when American distillers, who already used wood barrels for transport, began to recognize and manipulate the effects of wood and wood-aging to boost the quality of their whiskies. This major advancement in quality began to turn distilling into a respectable and viable trade. Further evidenced in 1797 when James Anderson, George Washington’s farm manager (and as fate would have it an experienced Scottish grain farmer and distiller) convinced President Washington that Mount Vernon’s crops, combined with the large merchant gristmill and the abundant nearby water supply, would make a distillery a proper and profitable venture for the soon to retire Gentleman-Farmer. Washington had tried for most of his life to turn Mount Vernon into a self-sufficient manor and source of wealth through the sale of its many agricultural products. The distillery, one of the largest in that time, was profitable and at its peak was producing about 11,000 gallons of high-quality spirits a year.

Distilling chugged along throughout the next two centuries, mostly in the same pot stills. However the trade was being transformed through pride and craftsmanship within each region and by hundreds of small manufacturers dedicating themselves to crafting better and better products.

Some things certainly worked against advancements. Distilling was not immune to the huge toll the American Civil war brought to bear on the nation. Wartime prohibition in the Southern states, loss of farm-hands and abandoned or destroyed farms basically halted production and drove the dwindling supply to the black-market where prices skyrocketed to over 30 dollars for a gallon of Bourbon. After the war ended many distilleries never reopened or simply became rectifiers. Then in the late 1800’s the Federal Government decided the way out of the national debt created by the war (just as it had done post-Revolutionary War) was to impose an excise duty on distilled spirits; in this case the tax was an astonishing 2 dollars per gallon.

Of course this drove a large portion of distillers underground (or into the cover of night) and gave rise to “moon shining” or illicit distilling in order to avoid the tax. Innovation and quality became second to having an illegal still discovered and also gave rise to nicknames like “white-lightening” or “skull-pop” for this raw, high-proof, quickly-produced, unaged and occasionally lethal spirit.

This is a wonderful time to be working closely with local farmers. By sourcing the majority of our raw materials locally we have access to every aspect of production from farm to bottle and support our local community; All of these things appeal to the educated drinker as well as the conscious buyers, Chefs and Sommeliers. Gable Erenzo, Tuthilltown Spirits Distillers