Irish whiskey had a hard time in the 1900’s. The Irish War of Independence, US prohibition and the introduction of Scotch blended whisky took a toll on the growth of the segment. This period also caused the eventual consolidation of all the distillers in the 1970’s to become a single monopoly, Irish Distillers. This lasted for nearly twenty years until Cooley Distillery was formed in 1987 bringing life and competition back into the marketplace. With the sale of Irish Distillers to Pernod-Ricard, and Bushmills to Diageo, the game is on and consumers are responding. Irish whiskey is now the fastest growing segment in the brown goods category and the future looks good. Join us, as we take a look at some of today’s hottest brands. Each whiskey was tasted twice, neat. 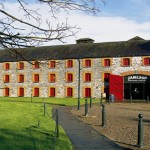 Irish whiskeys have important roots in history and Bushmills plays a large part in that history. Its origin dates back to 1608, when King James I granted Sir Thomas Phillips a royal license to distil in “the territory of the Rowte” in County Antrim. This is the first official recorded evidence of whiskey-making in the area that was to become Bushmills. The storied past of this spirit is deep and covers over 400 years. Some points of history you may not know: the distillery burned to the ground and was rebuilt in 1885; and the S.S. Bushmills, the distillery’s own steamship, made its maiden voyage to America to deliver its whiskey in 1890. Bushmills is a Diageo product; www.diageo.com.

BLEND/ORIGINAL – Medium straw color with a pleasant woody nose that tickles the senses without burn. The whiskey has a nice creamy, viscous texture in the mouth with a unique flavor I can’t quite put my finger on, but it is definitely from the wood in the barrel. It finishes properly, a well-made whiskey.
Suggested use – rocks, with water, mixed, and coffee.

BLACK BUSH – Editor’s Choice – Rich golden color. I was expecting a much more pungent nose, but the aromas are soft with a caramel, crème brulée nose. Spicy flavors on the onset give way to an explosion of tastes including citrus, wood, and vanilla.
Suggested use – neat, rocks.

10 YEAR MALT – Medium golden color. The nose is soft, like Black Bush, but richer and more complex in this single malt. The flavor is rich and malty with thick vanilla tones. The single malting produces a rich flavor that is more linear from start to finish.
Suggested use – neat, rocks.

John Jameson founded his distillery in Dublin, in 1780, and it is now the No. 1 selling Irish whiskey brand in the United States and the world. Jameson is made with a combination of malted and unmalted barley. The malts are dried in closed kilns, retaining the natural flavor of the grain and setting it apart from the smoky taste associated with scotch, which is dried over open peat fires. It is matured in bourbon-seasoned American oak and sherry-seasoned Spanish oak casks. Jameson is a Pernod-Ricard product; www.pernod-ricard.com.

BLEND – The color is lighter than most with a nose that comes off clean, a bit non-distinct. The whiskey is medium to light-bodied on the palate with a lean aftertaste of malt and vanilla.
Suggested use – mixers and coffee.

12 YEAR SPECIAL RESERVE – Light golden color with a soft, enticing aroma accented with vanilla tones. Very smooth on the palate; ending with a rich, smooth and silky finish.
Suggested use – neat, to enjoy all the nuances.

18 YEAR LIMITED RESERVE – Editor’s Choice – A light golden color with an intriguing deep vanilla and sherry nose. It is very creamy and viscous on the palate with an aftertaste that is long, soft, and luxurious.
Suggested use – neat, to enjoy all the nuances.

Opened back in 1757, the Old Kilbeggan Distillery is the oldest licensed whiskey distillery in the world and is situated in the heart of Ireland. The distillery is also known for its close encounters of the supernatural kind. Stories handed down through the years of strange sounds in the distillery and numerous paranormal sightings all have been well documented. www.kilbegganwhiskey.com. Kilbeggan is handled by Gemini Spirits and Wine www.GeminiSpiritsWine.com.

BLEND – Editor’s Choice – The color is a medium golden straw. A spicy, somewhat sharp nose. Full-bodied in flavor and a bit more complex than its constituents. A good whiskey with backbone that might appeal to the bourbon crowd.