The Savannah Red chef’s road to the James Beard House was filled with storms, meltdowns and 85lbs of pork belly!

Charlotte, NC (September 1, 2009) – Cooking dinner at the James Beard House in New York City is every chef’s dream, and any one of them will tell you they will do whatever it takes to make that dream a reality.When Jean-Pierre Marechal, executive Chef at Savannah Red Restaurant at the Charlotte Marriott City Center, was invited to cook at the James Beard House last month, he literally moved a good portion of his North Carolina Restaurant to New York City in order to undertake what he considered to be the greatest honor of his – and perhaps most every – chef’s career! 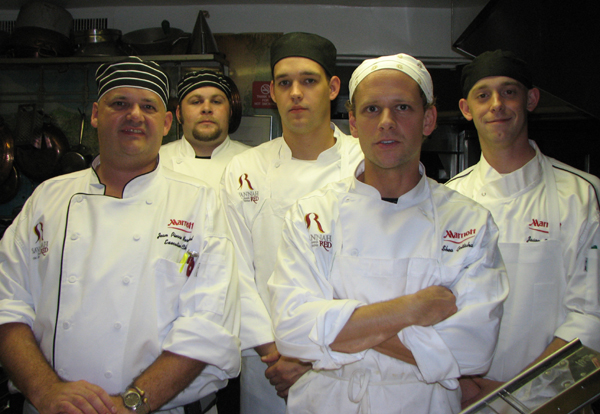 With his team of five (including Jason Gray, Billy Brown, Chuck Herrick, and William “Shea” Gottshall), Chef Marechal rented two refrigerated vans and drove from North Carolina to New York with 85 lbs. of Kurobuta pork belly, 50 lbs. of duck leg for confit, 6 crates of peaches, 60 lbs. of heirloom tomatoes, 10 lbs. of Imperial lump crabmeat, 15 live lobsters, 20 lbs. of haricoverts, 30 lbs. of cauliflower, 10 lbs. of okra, 30 heads of Bibb lettuce, 10 lbs. of yellow squash, and more, as well as all of the seasoning, condiments, oil, cream, butter, meal, and special equipment they would need to create their dinner. Most of the produce was picked the morning of the day they departed on their pilgrimage to NYC and the lobster arrived in North Carolina that morning by special delivery.

The kitchen crew left Charlotte at 3 p.m. on Monday and at about 10 p.m. that evening, they began to have issues with the refrigeration on one of the vans. A storm was brewing outside as well and they were forced to pull off the highway into a gas station to wait out the storm and try to fix the refrigeration unit. When that failed, they went to a nearby store to buy a tarp and 50 bags of ice cubes to cover all the food. 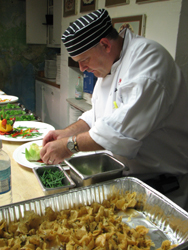 They arrived at the New York Marriott Downtown at 4 a.m., unloaded the vans, and slept from 7 to 10:30 a.m. they then did all the prep in the Marriott kitchen until about 9 p.m. that evening. The next day, they awoke at 5:30 a.m., loaded up the van, and at 7 a.m. they drove to the house (the James Beard House, that is) to begin to cook the dinner of their lives. They didn’t leave the James Beard kitchen until 11 p.m. tired, but smiling from ear to ear.

The next morning the chefs hit the road to travel home, arriving at 8 p.m., with time to unpack, return the vans, and head home in the wee hours of the morning. A tiring journey but one they would all do again in a heartbeat! The menu that they prepared at the James Beard House was borne from the cuisine served at Savannah Red Restaurant, where the belgian-born Chef Marechal has put an elegant twist on traditional southern cuisine making it more upscale for a fine dining restaurant. The James Beard House dinner, which was sold out, was described by diners in attendance as “sheer perfection.”

ABOUT SAVANNAH RED AT THE CHARLOTTE CITY CENTER MARRIOTT

Savannah Red is a unique, upscale restaurant that elevates the time-tested flavors of traditional southern cooking to new heights. Perfectly fusing imagination and wit into the standbys of southern cuisine, executive Chef Jean-Pierre Marechal creates a culinary experience as striking as the interiors. The bold use of color and modern furnishings – as well as superb service – will set the tone for a truly unforgettable meal at Savannah Red. Savannah Red’s menu has its roots in the old south with an added twist of new south sassiness in its offerings. With awe-inspiring dishes, the restaurant has something that will please the most discerning palate. www.MarriottCityCenter.com.