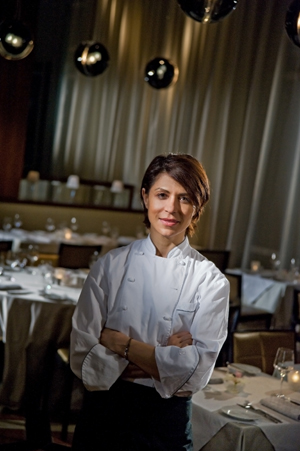 Everyone got a chance to get to know Dominique a little from her involvement with the Food Network’s hit TV show, The Next Iron Chef. While she did not win the title, it is a great honor to be asked to be a part of the cast of chefs. Dominique is back at work at Luce, in the InterContinental San Francisco.

Raised in Versailles, France, Executive Chef Dominique Crenn developed a keen interest in cooking as a young girl surrounded by a family that celebrated fine dining. Crenn moved to San Francisco in 1988 where she began her formal training as a chef, fell madly in love with the city, and remained there for the next nine years. During that time, she built an impressive resume, working under the tutelage of San Francisco luminaries Jeremiah Tower and Mark Franz for over two years at the celebrated Stars. She later heated up the kitchens of lauded restaurants such as Campton Place, 2223 Market, and the Park Hyatt Grill. Crenn was subsequently hired as executive chef of the Yoyo Bistro at the Miyako Hotel, where she obtained an impressive 3-star review in the annual Access San Francisco book during her one year there.

Following her tenure in northern California, Crenn moved to Indonesia in 1997. There, she made history as the first female executive chef in the country when she took the helm at the Intercontinental Hotel in Jakarta. Crenn’s work in Jakarta was abbreviated due to the political turmoil in Southeast Asia, and she returned to California in 1998 to accept the position of executive chef at the Manhattan Country Club in Manhattan Beach.

Named a “Chef to Watch” in 2007 and “Chef of the Year 2008” by John Mariani in Esquire magazine, Chef Crenn’s vision at Luce is to create a menu that emphasizes high-end artisanal, sustainable, and seasonal New American cuisine with wonderfully unexpected and diverse influences. Luce was named one of twenty “Best New Restaurants” in Esquire magazine’s October 2008 issue, it was selected by Robb Report magazine’s editors as one of seven restaurants named “Best of the Best 2009,” and it received a Michelin star from the esteemed Michelin Guide in 2009.