The Palm Restaurant in Buckhead, Atlanta, recently hosted a pairing dinner for the discriminating Scotch drinker featuring The Glenlivet Scotch. The event was hosted by the Brand Ambassador, Randy Adams, or as he likes to be called, “The Glenlivet Guy”.  I have known Randy for around 20 years or so, (we both hail from Sarasota, FL) and I have never met anyone who lives to love Scotch more than this guy. When we first met he was running a club that boasted that they carried every bottle of Scotch that was imported into the states, he has worked at several Scotch distilleries and spent his summers in Scotland studying and drinking his passion. He even plays in all the Scottish games and all, I mean he’s hooked. With that being said, we had a good guide for our tasting. All the Scotch’s were excellent and served correctly. I will share my tasting notes with you and encourage you to order these fine Scotches the next time you are in an establishment that caters to fine taste.  Thanks go out to Randy Adams, Thom McCorkle of Pernod Ricard USA and Willy Cellucci, General Manager of The Palm, Atlanta.

The color is medium gold with a soft nose. A creamy start gives way to burst in the middle palate. It finishes with sweet vanilla. I suggest with water or on the rocks.

This is a cask strength Scotch, not for the timid. The color was light. The strong nose was clean and crisp, with a definite lemon zest. The body was oily and bold to match the high alcohol content. It has a big kick but the burn was pleasant. I suggest a wee bit of water or an ice cube. 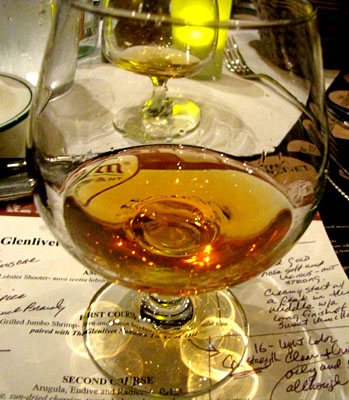 Editors Choice –The color is dark from the French Limousin oak barrels it is aged in. The nose is soft and rich and layered with wood spice. The mouth feel reminded me of a fine French brandy. The finish was sweet and lingering. I suggest drinking this neat.

The color is dark straw. The nose is soft and reminiscent of Crème de Brulée.The body was viscous and rich with a long soft finish. A superb whiskey. I suggest an ice cube.

Where were you in 1988? The color is dark and rich from the Spanish Oak it is aged in. The nose has hints of cinnamon and nutmeg spices. Mellow and smooth, almost linear flavor in the mouth with a soft velvety finish. 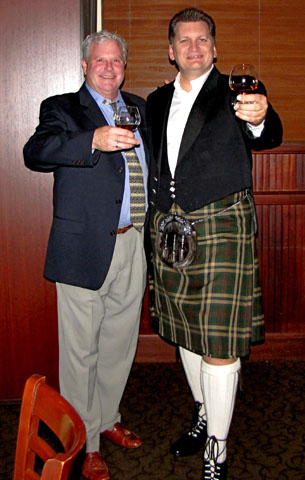 Mike Raven, Editor of in the Mix with The “Glenlivet Guy” Randy Adams