Did you ever wonder what goes into the preparation behind the scenes for all that mixology you see at the Cheers Conference? 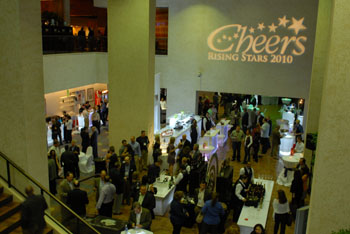 This year’s Cheers Beverage Conference theme was “A New Twist on the Classic Event”.  Let’s go behind the scenes to see what it takes to pull off all that mixology at the Rising Stars and the Celebrity Mixologists grand gala receptions, definitely a big challenge with a “New Twist”.  Here is a definitive interview with the team that made it happen and some of the stats that went into putting those two venues together, along with the other seminar tastings and beverage breakouts.

iMi Agency was commissioned to package the beverage elements of this year’s Cheers conference. This encompassed all elements related to beverage and beverage venues including thematic content and design.

Brittany Chardin was iMi’s Account Manager who was assigned the task of coordinating the drink mixology.  She was the perfect choice with her bar and chef background.

In her own words: “It all began with a pre-planning site visit to determine the hotels capacity vs. our needs — a prep area, glassware and equipment list was determined at that point for the rising stars and celebrity mixology reception. I also was the contact person for the celebrity bartenders and rising star bartenders making sure they had everything they needed and that they were asking for everything they might need.” 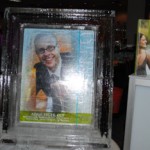 Brittany’s overview by the numbers: 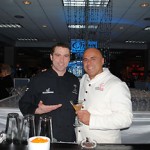 “The process began weeks before the actual event as each of the 80 alcohol recipes had to be read through, edited, and the math calculated to determine the overall needs. By needs, I mean I had to break down the recipes into spirits, supplier mixer, juices and any other non supplier mixer, produce, garnishes and equipment needed to build each recipe.  I would multiply by the 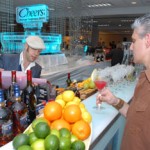 number I thought would be served that night, and then divide by case pack.  I would then add those needs to the prep list for that bar (making sure that I 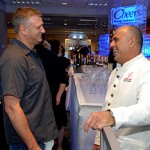 had enough total but also making sure to divide into enough containers so that each bartender had their own). Then I added those needs again to the overall event order spreadsheet and overall prep lists 80 times based on our calculations.  I also had to gauge how popular each particular recipe would be.  Recipes came to us by the drink and had to be 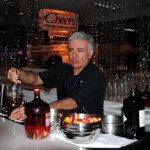 recalculated based on bottle size and pack size for each individual ingredient and then cross referenced for how many hands would be producing the recipe at one time so that bartenders were not in a sharing situation. This turned out to be a huge task.”

“The number of signature drinks needed to be prepared: For Tuesday evening’s reception, 58 different sponsor recipes, plus 12 celebrity bartenders’ recipes were prepared during that reception alone. On Monday evening we also ordered all the product and equipment for the 10 Rising Star recipes, the frozen daiquiri bar and the Sponsors’ featured products’ bars at which we featured their products in Margaritas, Manhattans, Martinis, Mojitos and Caipirinhas.
Number of recipes: Total alcohol and non-alcohol recipes — over 100.”


Ingredients by the number 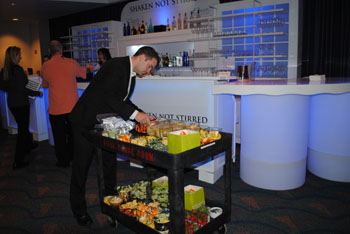 581 different ingredients:  Our master spreadsheet for all of the spirits, beers, wines, mixers, equipment, produce, garnishes, ice, etc. listed over 581 individual line items.  (Cindy Mullins, iMi’s Administrative Assistant assigned to this event, was the keeper of the master database and the one that sent and resent requests for recipes and products from the suppliers and the Rising Stars and Celebrity bartenders.)  The chart below only represents garnish needs and only the first three columns dealing with total quantity counts to be used.