District serves up contemporary American Classics with an emphasis on local and regional products. Always focused on creating a memorable, and of course, delicious experience for its patrons, District teamed up some menu item favorites with cocktails made with taste enhancement in mind. District’s emphasis on “fresh” was the inspiration for this four-course pairing, which features seafood-specific dishes finished with the sweet flavor of apple pie.

Heinrich Stasiuk
General Manager
Bringing his international experience to District, Heinrich Stasiuk will ensure all aspects of the restaurant function with efficiency and attention to detail. Stasiuk contributes a worldly sensibility to his role after operating his own restaurant, working in various locales across Europe, and serving as director of restaurants for JW Marriott.

Nathan Crouser
Chef de Cuisine
Chef Nathan gained extensive restaurant experience from San Francisco’s famed restaurants Aqua and Michael Mina, as well as the Phoenician’s Il Terrazzo where he worked as a Sous Chef. He has worked across the United States and internationally, including in kitchens in Pennsylvania, New York, Maryland, Arizona, San Francisco, and Denmark. He is a graduate of The California Culinary Academy and became a Level One Sommelier in 2007.

Pairing: Districts emphasis on “fresh” was the inspiration for the four-course pairing, which features seafood specific dishes finished with the sweet flavor of Apple Pie. Guests cannot get enough of the Steamed Mussels, AZ Sweet Shrimp Po’ Boy Sliders or Golden Calamari, which have all been menu staple since District’s conception. After choosing the seafood line-up, General Manager, Heinrich Stasiuk works his magic behind the bar creating American cocktails mixed with only American products. 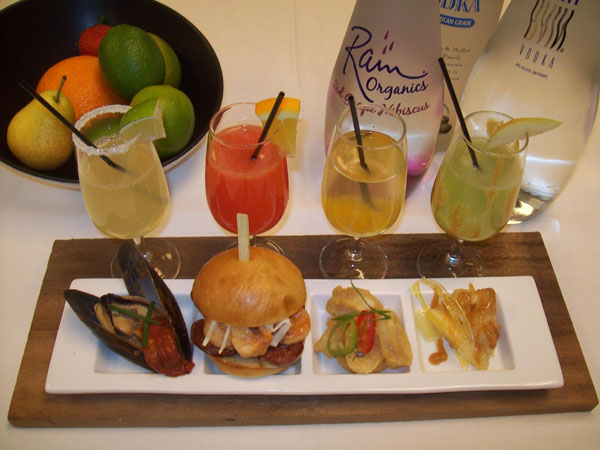 Arizona-raised sweet shrimp tossed in special dressing and served on a soft roll with andouille sausage and celery root slaw.