“Reminds me of my safari in Africa. Somebody forgot the corkscrew and for several days we had to live on nothing but food and water.” –W.C. Fields 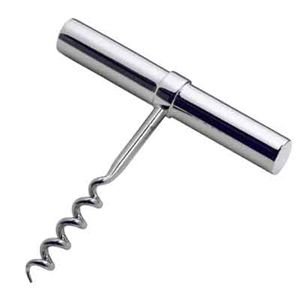 Today is the 150th birthday of the corkscrew. At least one patent of the corkscrew here in the United States. M.L. Byrn of New York, N.Y. was granted a patent for a corkscrew on March 27, 1860. But the practice of using corks to stopper bottles was in place well before this time. So how did folks remove them prior to 1860?

A “gun worme”, which was a spiraled piece of metal used to clean muskets or to dislodge unspent bullets, was also put to use to remove corks from bottles holding anything from beer to medicine to food and later wine.

Many types of corkscrews have followed, from “winged” versions to electronic types including the “Butler’s Friend”, a corkscrew very similar to today’s waiter’s type corkscrew, which was granted patents in Germany, England and France in 1881 and 1882. And like anything that is “designed”, corkscrews can be quite unique. A few weeks ago, Bottlenotes’ newsletter “The Daily Sip” had a story about the corkscrew with a link to a collection of antique corkscrews. It’s a lot of fun looking through the different designs for such a seemingly plain tool.

Do you have a favorite type of corkscrew? What is the most unique corkscrew you have run across?