Rum is truly one of the most fascinating spirits in the world, with a long and intriguing history. Once it was learned that the sticky syrup molasses, a product of sugar production, could be fermented, the stage was set for the spirit to thrive and grow into one of the most-consumed adult beverages in the world. The product has evolved from the days of Caribbean trading starting in the 1600s, to today’s refined spirit with many types of distilling, aging, and blending.

The rum category has exploded with the onset of spiced rum and now with flavored rums that seem to be growing by the day. I will not taste flavored rums for this exercise but will concentrate on the traditional categories with a little spiced rum thrown in. Each rum was tasted twice, neat.

A blend of aged rums from 6-23 years old, from the “Sistema Solera” aging process. It is distilled from the fi rst pressing of virgin sugar cane and is matured at high altitude in bourbon, sherry, and Pedro Ximenez wine barrels.

The nose is full and spicy with hints of herbs. The flavor is complex and medium-bodied with a mid-palate burst and long, long finish. A masculine rum with a little oomph, but very smooth. 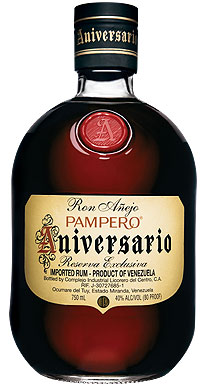 A blend of pot still and continuous still rums aged in oak for a minimum of 8 years. Crafted to celebrate the 30th anniversary of the Pampero Distillery.

The nose is very sweet and rich with cocoa overtones. Simply wonderful! The fl avor is luscious and the alcohol is very subdued; it just warms you. The flavor coats your mouth with a viscous blanket and finishes nicely if not a bit short. All in all, a wonderful sipping rum.

Suggested use: Neat or with a few cubes. 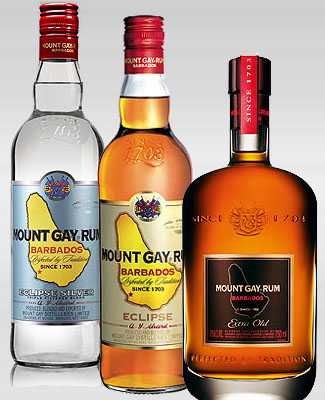 The nose becomes sweeter as it is worked in the glass and you are able to take in a good draw without heat. You pick up tropical fruit, almost a banana aroma. The body is light on the palate and doesn’t taste like the aroma to me; it turns woody and strong. Pleasant enough, if not a bit strong to drink neat.

Suggested use: Neat or with a bit of ice. Maybe with a bit of your favorite flavoring. Would be great in a prestige nog or signature drink.

Distilled from both column and copper pot stills, matured separately in Kentucky oak, and blended.

The nose is semi-sweet, not distinct. The flavor is a bit strong to drink neat. It is a leaner flavor with pronounced alcohol that would be better mixed appropriately for the flavor to show nicely.

Distilled from both column and copper pot stills, then filtered 3 times.

A bit medicinal on the nose but not in a disturbing kind of way. The mouth feel is syrupy and clean with tropical notes.

Suggested use: A good rum to use in all cocktails that call for a light rum. Cola would be a good partner. 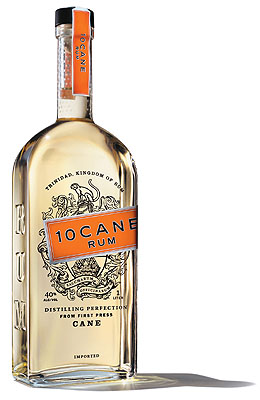 The nose is pronounced and spicy. Full in flavor and not shy compared to other light rums. The flavor is a bit alcoholly to me, more like a cachaça. It is uniquely different and may not be for everyone. The rum really shows its stuff when blended in a cocktail, which I did, and its character showed much better than when tasted neat.

Suggested use: Great in Mojitos, caipirinhas, and all other light rum drinks. 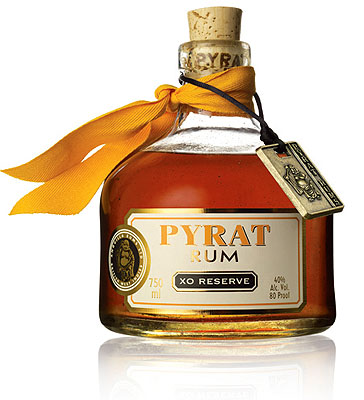 A blend of 9 Caribbean rums aged up to 15 years in Limousin Oak and American sweet oak barrels.

The nose is rich vanilla with burnt orange overtones. The unique flavor of orange zest follows from the nose and seems to settle on the lower palate and then mushrooms into a mixture of citrus, cinnamon and caramel. The finish is smooth and long with a nice warming numbness asking for the next sip.

Suggested use: Neat, rocks and blended in an XO cocktail. 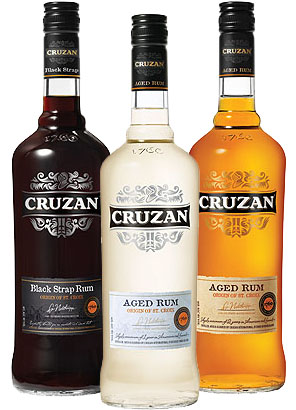 Considered a Navy rum but not quite as heavy. Made from blackstrap molasses.

The nose is molasses, pure and simple. A rich, dense rum that creates legs on your tasting glass. It is viscous and rich in the mouth, generous but not overpowering at all. Nice finish.

Suggested use: On the rocks, floater, Planter’s Punch

The nose is sweet tropical fruit – papaya. The body is medium with a very smooth and rich flavor. It has sweetness but is very well balanced. I was pleasantly surprised with this rum. This finish is soft and long.

Suggested use: On the rocks or mixed. A very versatile rum.

A blend of rums aged minimum 1 year in American oak.

The nose is moderate and clean due to the filtration process. Flavor is full-bodied and smooth, not harsh at all.

Suggested use: A very good rum to use in all cocktails that call for a light rum. 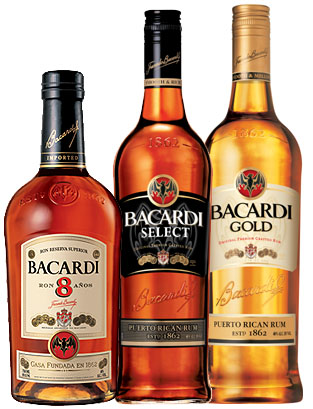 A dark rum from fermented molasses.

The nose gives off a bit of alcohol and can tingle a little; stronger than the other dark rums. The flavor is bold and generous with a strong finish.

Suggested use: This rum would be a good mixer to give drinks a strong character and color.

Rums aged for more than 8 years in selected oak barrels.

The nose is softer than I thought it would be. You have to reach for it a bit but once it opens up, the tropical fruit and vanilla show through nicely. The body is medium with a full, smooth viscous feel that coats the mouth with tropical flavors. A long finish of wood and caramel flavors end your sip. A well-made rum.

Suggested use: On the rocks or mixed. Would make a great premium Cuba Libre.

The nose if full and woody and will tickle you if you get too close. The flavor is robust off the start and transfers into nice peppery, vanilla flavors.

Suggested use: A good all around mixer where you want more flavor than a white rum. 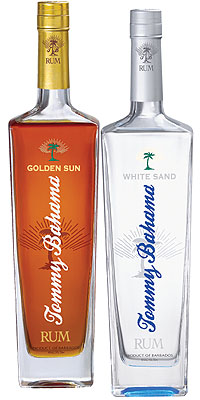 The nose is a pitch higher than most, not so sweet – I get a bit of tangerine citrus and roasted almonds. The flavor follows the nose: not sweet, light with citrus and vanilla, with a long clean aftertaste. You can tell this is a premium product from the start to finish.

Suggested use: Neat if you are looking for a lighter-bodied rum, on the rocks, and mixed.

A small batch molasses rum aged in oak barrels for at least 2 years.

The nose is full of tropical fruit, Valencia orange, and roasted coffee. Amazing nose for a light rum. The medium-bodied rum surrounds your mouth with a depth of flavors that stay with you until your next compulsory sip.

Suggested use: Chilled neat, rocks, Cosmo. I’m sure it is great in all rum drinks but I would choose a cocktail that lets the flavor show through.

Handcrafted rums in a 15-year “Solera” system in French oak.

The nose is a sweet vanilla with caramel overtones and a bit woody. My first impression was a fine brandy. You can feel the sweet alcohol resonate in your mouth. It definitely has finesse yet is powerful; the flavor is not masked by sweetness. A masculine rum.

Fresh-cut mountain cane is used. The new rum is combined with a small amount of aged rum and rested in Brazilian Amendoim wood.

The nose is rich and sweet, almost like a darker aged rum. The body is rich with a balanced sweet cane flavor that envelopes your mouth with a long satisfying finish.

Suggested use: Caipirinha, rocks, rum-tini – all your favorite rum drinks. I would use in simple form to allow the flavor to show through.

A Navy rum with a fun twist on the famous tattoo artist Sailor Jerry.

The nose is unique, to say the least. I get cloves and honey with a bit of spice cabinet thrown in for good measure. It starts out slow and billows into a flavor rush; must be the high proof. It hangs around awhile too, like a good tattoo.

Suggested use: Tiki, grog, or rocks for the adventurous.

A spiced rum made with other natural flavors celebrating Captain Henry Morgan, the legendary buccaneer.

The nose is soft and slightly sweet. A little soft on the palate with a good balance of flavors. It finishes smoothly with no heat at all. It’s easy to see why it is so mixable. It is very pleasant rum that is used in many different ways.

Suggested use: All popular rum drinks to add a bit of flavor, cola.

A spiced rum made with Fijian water; named in honor of the 7 Tikis, which Polynesian navigators carved on their boats, that represented the 7 skills and qualities they would need to complete their journey.

The nose is laced with vanilla and caramel; very pleasant. The flavor does not scream “spiced” but there is an assortment of flavors not found in regular rums. Banana, vanilla, and moderate sweetness move through your palate gracefully. The finish is clean and warming. A nicely-made rum that is not overly spicy at all.

Suggested use: Rocks, with cola, or mixed.

The nose is different than most…a clean, yet warm, tingly blend of oak and light molasses and a bit of banana. The body is lighter than I expected but the flavor is strong. A masculine rum, not sweet. The finish is long with a bit of numbing in the upper pallet.

Suggested use: Pina Colada’s, floaters, cola and all drinks calling for a dark rum.