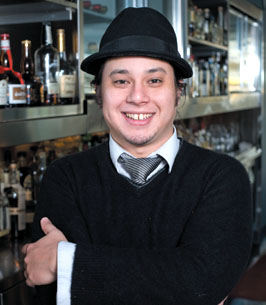 After working as a bartender for six years in Atlanta and developing a growing love of fine wines, foods, and spirits, Eric Simpkins came to realize he’d found a career and not just a job. He began his culinary career working as a bar manager at The River Room where he oversaw the wine list and spirits program, which lead to his especially avid interest in traditional spirits and antiquarian cocktails. In the years following, he continued building and honing his barcraft and management skills while developing his palette for all things culinary, until he decided to challenge himself anew. In 2005, at age 27, Simpkins moved to New York to attend The French Culinary Institute. It was there that he received the opportunity to work with Audrey Saunders at her famous New York cocktail-focused lounge, the Pegu Club.

While refining his skills alongside other notable New York mixologists at Pegu, Simpkins learned of a growing demand for skilled bartenders in his adopted hometown of Atlanta, a market whose craft cocktail scene had just begun to grow. Simpkins graduated from FCI in 2006 and moved back to the South to become head mixologist at TROIS, where his menu of 20-odd cocktails was inspired by his New York training, informed by his classic French culinary schooling, and colored by the Southern and Asian traditions of his upbringing. While at TROIS, Mr. Simpkins was named a “Rising Star Bar Chef” by StarChefs.com. 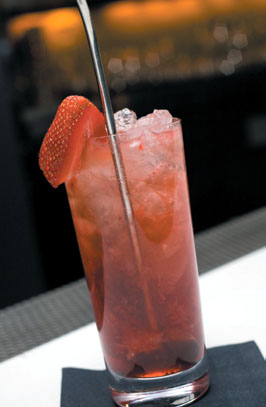 In 2009, he left TROIS to lead the bar staff and learn from Sasha Petraske at Drinkshop, a new project with the W Hotel group attempting to bring the classic cocktail hotel bar into the 21st century. During this time, one of Simpkins’ cocktails was selected as the national winner in the Tangueray & Tonic contest, and another of his cocktails won 2nd place nationally in the GQ & Bombay Sapphire’s annual Inspired Bartender Search.

Eric also completed his first year as a cocktail apprentice in 2009, when he was awarded a spot among 30 or so of the country’s top bar professionals selected to help bring the annual Tales of the Cocktail to life. His hard work and dedication there earned him the appointment as one of the Tales Ambassadors for Cointreau’s Trails of the Cocktail, an honor that included a trip to France to witness their growing cocktail culture.

His cocktails have also been featured in Food & Wine, Garden & Gun, and Restaurant Forum, as well as many local Atlanta publications. In addition to the Drinkshop concept, Eric has also recently started Ease Libations, a company that offers consulting and private event catering.