Burgers and margaritas – two American favorites. And you’ll find them both at Ted’s Montana Grill. But our burgers aren’t just any old burgers. And our margaritas certainly aren’t the run-of-the-mill, mix-out-of-the-bottle, libations. We cook all of our burgers to order dozens of different ways – just the way our guests want them – and we’re the only national restaurant company to serve both beef and bison burgers every day across America. In fact, we serve more bison hamburgers than any other restaurant company in the world and our burgers have been named among America’s best by AOL Digital City and other media sources. 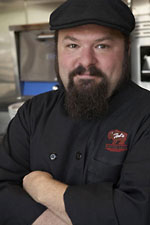 Corporate Chef Chris Raucci is known for his creative use of fresh ingredients to add a distinctive flair to traditional foods. Raucci received his culinary training at Johnson & Wales University in Providence, Rhode Island, where he was a magna cum laude graduate. He started his professional culinary career as executive sous chef at City Grill, the award-winning, four-star restaurant in downtown Atlanta. He later became executive chef at Killer Creek Chophouse. Raucci shared his culinary talents at his family’s popular Italian restaurant, Raucci’s on East John Street in Charlotte, N.C., and started a successful personal chef venture in Florida’s exclusive Seaside community before returning to Atlanta. He joined Ted’s Montana Grill in 2003 as the company’s first corporate chef. In this role, he researches and develops new menu items as well as drink recipes for the company’s 54 restaurants, and he oversees the culinary and beverage training of all restaurant managers, bar managers, and teams.

A popular favorite at Ted’s Montana Grill is our own Green and Hot Bison Burger. This zesty burger starts with freshly-ground bison meat, seasoned with Ted’s own special seasoning. The patty is then grilled to order under a small steel dome atop our flattop cooking grill, to seal in the flavors and juices. Just before the bison patty is ready, we top it with grated Monterey Jack cheese and place the burger back on the grill to melt the cheese. Once off the grill, we spoon our chunky, housemade guacamole onto the center of 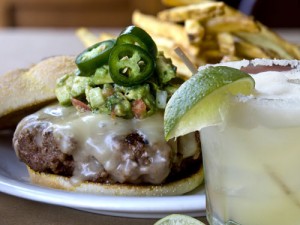 the patty and top that with freshly sliced jalapeno peppers to add the heat. The juicy burger is placed on a corn-dusted Kaiser roll, which has been slightly toasted with a hint of butter, and is served with a garnish of lettuce, vine-ripened tomato slice, red onion ring slices, and sour pickle chips. Each burger comes with Ted’s own French fries, made with each burger order. We take a whole potato and cut it up into French fries that are then cooked in trans fat free oil. The Green and Hot Bison Burger paired with our Signature Margarita adds a spicy yet refreshing southwestern flair to the Ted’s Montana Grill menu and has become one of our most popular burger/drink choices.

Ted’s Montana Grill is known for great margaritas and for adding our own special twist to America’s favorite cocktails. The Ted’s Signature Margarita is our classic and most popular drink offering. One of the most appealing aspects of this drink is our special sour mix recipe, made fresh in the restaurants each day. We make a simple syrup and after it cools, it’s mixed with just the right amount of freshly-squeezed juice from oranges, lemons, and limes. Then we add a touch of egg white to the mix, which creates an appealing froth to the top of the drink once shaken. For the Signature Margarita, we use Jose Cuervo Tequila, to which we add Cointreau and sour mix. The fresh margarita ingredients are shaken and poured over ice in a highball glass prepared with a kosher salt rim and garnished with a freshly cut lime wedge. And, in keeping with Ted’s Montana Grill’s eco-friendly practices, the drink comes with a wooden (not plastic) stir stick.