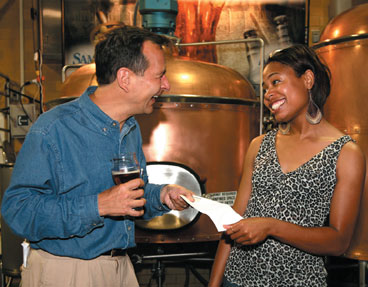 The past two years have been one of the most challenging times in decades for businesses across all industries, but the food & beverage industry seems to have been hit particularly hard as consumers in the U.S. have cinched up their belts and cut back on dining out and entertainment. Despite the difficulties the economy has presented, there are many retailers and food & beverage businesses that have continued their philanthropic initiatives. In Boston, low and moderate income small business owners are getting a leg up from a brewer who understands the difficulties that small businesses face, especially when it comes to getting off the ground during a recession. Jim Koch, founder and brewer of Samuel Adams, launched a program in June 2008 called Samuel Adams Brewing the American Dream, to provide low income food & beverage microentrepreneurs (typically employing 1-5 people) with the financial support and mentoring they need to achieve their dreams, even when the odds are stacked against them. 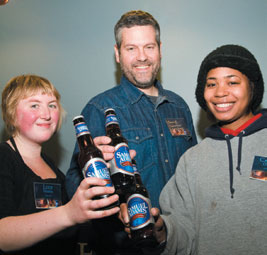 Jim founded The Boston Beer Company in the early ‘80s, just as the country was climbing out of the worst recession since the Great Depression. He used his great-great-grandfather’s beer recipe, long hidden away in the attic, and began brewing in his kitchen. His first beer is now known as Samuel Adams Boston Lager. Jim applied to several banks for a loan to start his fledgling business but every one turned him down. He went bar-to-bar selling his beer and then rented a truck to deliver it because no beer distributor would carry his brew. Despite these obstacles, Jim believed that beer lovers would appreciate the rich, full-flavored beer that was unlike anything on the market at the time, so he followed his dream. Today, Samuel Adams is the largest independent craft brewery in the country, but still accounts for less than 1% of U.S. beer sales.

Jim has not lost sight of his humble beginnings or forgotten how hard it was in the early years, which is why he felt it was important to give back to other passionate small business owners. The Boston Beer Company partnered with ACCION USA, the domestic arm of Boston-based ACCION International, a global microfinance nonprofit. To kick off the program with ACCION USA, the company committed an initial $250,000 to establish the Samuel Adams Brewing the American Dream Loan Fund, providing much-needed capital to low and moderate income microentrepreneurs whose businesses would not be approved for a bank loan. The microloans offered through Samuel Adams Brewing the American Dream range from $500 to $25,000, with an average loan size of $7,000.

In the less than two years since the program was launched in New England, Samuel Adams Brewing the American Dream has provided loans to 34 food & beverage entrepreneurs, directly saving or creating 262 jobs. The program also seeks to assist hundreds of others through coaching and mentoring workshops offered to local small business owners. Through educational opportunities like Speed Coaching workshops developed by Samuel Adams employees, the program has welcomed nearly 300 food & beverage entrepreneurs to events held at the Samuel Adams Boston Brewery and in Providence, Rhode Island. These events provide an opportunity for local entrepreneurs to meet one-on-one in 20-minute intervals with Boston Beer employees, for help in starting their own businesses. They can get advice and ask questions about web development, marketing, packaging, design, publicity, pricing, and sales &  distribution. 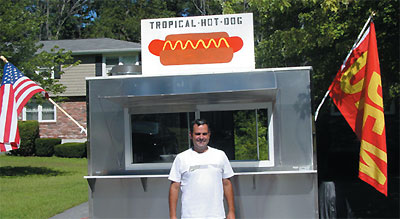 The program has helped entrepreneurs like Chef Luiz de Lima, a Brazilian native who arrived in the United States eleven years ago with a long-standing dream of opening his own restaurant. After operating an informal catering business in Massachusetts for over four years, Luiz smelled opportunity in the thousands of beach-goers who flock to his community every summer and decided to open his own business. Luiz had some money saved to purchase a mobile food cart that would travel up and down the beaches during the busy summer months, but he lacked all the funds needed to complete the purchase. He spent five years looking for financial backing but was denied bank loans because his business was just too small. In March of 2009, Luiz was approved for a $5,000 loan through the Samuel Adams Brewing the American Dream fund. Finally able to make his dream a reality, Luiz opened the Tropical Hot Dog during the summer of 2009.