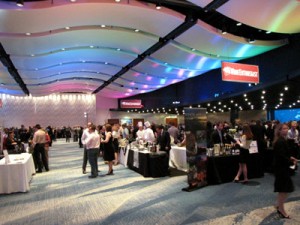 Having just attended the Atlanta version of the Toast of the Town, I must encourage everyone from San Francisco, Chicago, New York and Washington D.C. to consider attending their events. The great thing about this tasting is the abundance of restaurants and the quality of the tapas they offer. The wines run from mainstream to reserve, giving everyone a chance to try new everyday wines as well as the reserves and single vineyard wines for special occasions. The access to great food, nearly next to every wine station, gave me the ability to try the wines I wanted with a carefully prepared dish. So often I find myself at trade tastings where you don’t have that ability, and as we all know, wine tastes better with food. 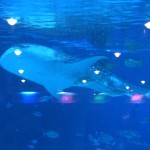 One of the high points of the evening was being able to taste the 2006 Cardinale, which was awarded 100 points by the Wine Enthusiast. The tasting was held in a separate room and conducted by the winemaker, Christopher Carpenter. He spoke of the orchestrated flavors of the wine and how they all blend together to create an extraordinary flavor. I must agree this 86% cabernet and 14% merlot blend of six different pedigree vineyards was, well, extraordinary.

I would be remiss if I didn’t mention the captivating location of the event. The Georgia Aquarium proved to be a magical and serene choice of venues. The ballroom is surrounded by the aquarium.  As I sipped one of my favorite wines of the evening, a Lucien Albrecht Riesling from Alsace, 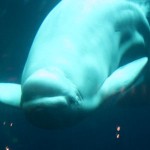 I was captivated by some of the most amazing sea creatures in the world. The three giant windows had everything from Beluga Whales to the gigantic Whale Shark swimming effortlessly around the room. While they are not in the wild, this aquarium does a great job of emulating their natural habitat.

I look forward to comments from other enthusiasts after they visit their show when it comes to town. Here is the schedule for the remaining shows. 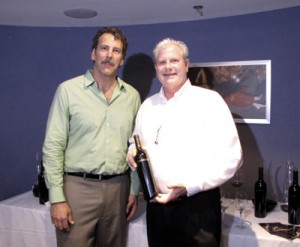 How to buy tickets:
Tickets can be purchased ahead of time at www.wineenthusiast.com/toast OR in-person at the door the night of the event.