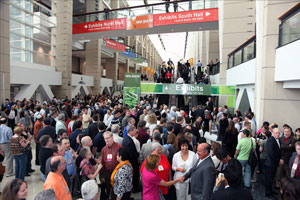 Wow!  That is all I could say as a first time attendee at the 2010 National Restaurant Association Show held at Chicago’s McCormick Place.  When I walked in to the convention center, all I saw was a sea of people.  Thousands of people.  I was immediately impressed with the amount of people this event drew.  I had taken the advice of a person who had attended the show previously and wore comfortable, walking shoes!  Boy, was that a good decision.  There were several football fields of vendors to see.  New inventions, updated machines, organic foods – you name it, it was there.

For me, I was most interested in the IWSB (International Wine, Spirits and Beer Event) which was held at the same time as the NRA Show.  It involved vintner, distiller and brewer tastings and demonstrations.  All the big name suppliers were there such as BACARDI, Brown-Forman, DIAGEO, Beam Global Spirits, Shaw-Ross, Crown Imports along with some smaller companies.  All suppliers displayed and offered tastings on most current and new products.

I was a bit disappointed in the fact that the IWSB Event was treated as a red-headed step child.  The actual IWSB Event was in its own ballroom, but downstairs and off to the side of the mainstream event.  If you were not looking for the IWSB Event, you would have missed it.  It was also behind closed doors with a doorman at the front, checking passes and IDs.  There were no big banners or signs directing traffic to the IWSB Event.  In speaking with several of the exhibitors, most said the traffic with the IWSB Event could have been better.  While I was there, I would say there may have been 50 people at the event.

It was great to see beverage alcohol have a chance to represent itself at such a large industry event and for our clients to discover and connect with both established and emerging suppliers.  I will attend the NRA Show and IWSB Event next year, but will allow for more time to spend at each event and hope that the NRA Show listens to the critiques of the exhibitors.  If you attended this year – what are your thoughts on the NRA Show and IWSB?

– The offical blog site for the NRA Show is http://nrashow.typepad.com/flooredblog2010/ –