Nope, I’m not talking about the old batman reruns with their Pop! Crr-aaack! Pow! – But some of the classic and cool summer drinks bartenders should be adding to their cocktail repertoire as the weather heats up.
With a few easy-to-execute moves, you can get your cocktail list ready for a sizzling summer season. And getting your bar ready for bikini season is a whole heck of lot easier than spending spring at the gym, trust me.
Think of your bar as you would your wardrobe. If you’re pulling out those Hawaiian shirts and the sandals picked up in Maui, the same thing should be happening behind the bar. It’s time to put away the dark spirits and bring the light-colored ones to the fore. Rum, cachaça, vodka, gin, and, of course, lots of tequilas, all should be placed up front and within easy reach of the bartenders. The clear glass bottles and colorful, playful labels will brighten up the back bar and entice your customers to kick back with their favorite summer drinks.
Adding fresh seasonal juices, flavored simple syrups, muddled fresh summer fruits, or striking exotic garnishes to spirited and non-alcoholic drinks already on the beverage menu are more easy moves anyone can master. Sometimes the powie! of a simple but unique ingredient or garnish sells the drink entirely. Investing a few extra pennies there can really zok! your beverage sales. 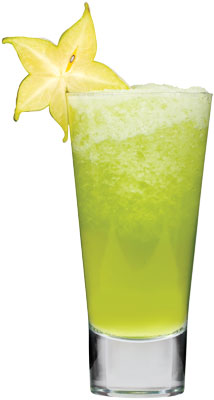 Hot Summer Flavors:
Yuzu
Guava
Passion Fruit
Lychee
Star Fruit
Mangosteen
Acai
Dragon Fruit
Mango
Blackberry
Mint
Cucumber
Thyme
Watermelon
Tamarind
Rhubarb
Lemongrass
Kumquat
Basil
Chilies
SMASH – a mid-1900’s muddled drink that starts with lemon, mint, and a base spirit.
FIZZ – A Collins in a shorter glass; chilled, no ice; using soda from a siphon, not a bottle. Or, not to be too confusing, a sour in a tall glass with no ice, topped up with soda. Either way, for the best bubbles, use a siphon.
FLIP – A drink that has survived the upheaval of many changes, now best described as needing whole egg, sugar, and a base spirit; sometimes cream is added for that extra, well, creaminess.
SWIZZLE – Before they put the lime in the coconut and shook it all up, someone thought using a little twig with forked branches as a stirrer was a fine idea. Oh, those crazy Caribbean bartenders! Modern day swizzle sticks are metal or plastic. To use properly, hold the shaft between the palms of your hands with the blades in the drink and rotate the stick rapidly by sliding your hands back and forth until the glass gets frosty. This method does an excellent job of churning and chilling the drink.
Drinking exotically is like taking a mini summer escape from the comforts of one’s bar stool. 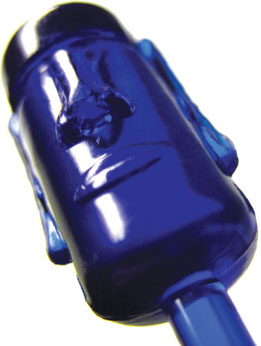 TIKI
Ahhh, the tiki drink – what could conjure up the excitement and mystery of far-flung drinking destinations more than rum drunk from an ornate ceramic cup? Drinking exotically is like taking a mini summer escape from the comforts of one’s bar stool. The Pearl Diver, Bora Bora, Mai Tai…the recipes are as seductive and unique as the tropical flowers that often adorn them. Besides the liberal use of rums and fruit juices, one thing remains a constant: the use of syrups, and two in particular – orgeat (almond syrup), and the oddly-named Velvet Falernum. Don’t be put off by the name, though. Its complex combination of almond, clove, allspice, vanilla, and lime flavors blends perfectly with rum, and those flavors are featured in many of the classics as well as “Death in the South Pacific,” the winner of this year’s official drink contest for Tales of The Cocktail.
There are a few commercial versions of both syrups available but I say go ahead, make the tiki gods happy, and brew up your own batch. To quote my good friend Gaz Regan about starting to experiment with making your own, “start out by stealing someone else’s recipe.” To that end, a quick web search will give you access to a few good recipes for both syrups. Special thanks to Paul Clarke for going through the 7 other versions before posting his much-used Falurnum # 8 recipe on his blog, The Cocktail Chronicles, found at www.cocktailchronicles.com
For further reading on all things tiki, including more recipes, history, lore, and fantastic photography, check out Beach Bum Berry Remixed, by Jeff “Beachbum” Berry, just released and surely soon to be regarded as the definitive guide.
The links for the following recipes can be found sprinkled throughout this article. These delicious drinks recipes and others can also be found in our Celebrity Recipes section.
Rhubarb Soda
The Green Swizzle
Balsamico Smash
Strawberry Rhubarb Fizz
Strawberry Mojito
Evan Martin’s Death in the South Pacific