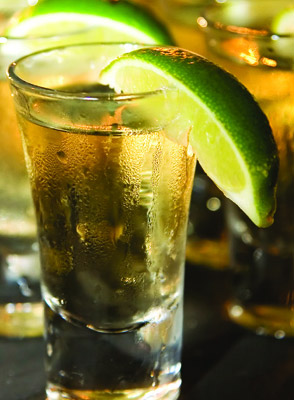 Tequila is a fascinating beverage with a rich history. Today the beverage is wildly popular with 100% de Agave brands enjoying the ride. People have discovered the huge difference in full agave tequilas and are requesting them more and more. With the # 1 drink, the margarita, as a base, the future is promising for this south-of-the-border friend. But the margaritas and shooters are not the only way to enjoy this fine spirit! I have asked the mixologists with the different brands I tasted to suggest non-margarita drinks after each review, to give you a few ideas of how to expand your tequila offerings.

But, not to fear, I have included some great margarita recipes from top-notch mixologists from around the country as well.

The Ernesto by Martin Cate

Q: What is blue agave?

MB: While the native agave plant had been harvested by Mexicans for hundreds of years, it was the French botanist Frederic Weber who first classified it during in the early 19th century. Noted for its bluish-green hue, the agave in and around the area became known as Weber’s Blue agave.

Q: What are tequila’s  historical origins?

MB: During their exploration of the New World in the late 1400s and early 1500s, Spanish conquistadors discovered a fermented beverage called pulque that was produced by the Nahuatl. The Nahuatl are the original inhabitants of the area of western Mexico who primarily used pulque in religious ceremonies and for medicinal purposes in their culture. The primary ingredient in the fermentation process of pulque was the agave. As the early Spaniards ran out of brandy, they searched for a source of fermentable sugar for distilling. They experimented with the agave, which was abundant in the volcanic soils in the Sierra Madre region surrounding Guadalajara. The species that produced the most full-bodied taste was the Agave tequilana Weber, the blue agave or agave azul.

Throughout the 20th century, tequila has continually  grown in popularity. Modern manufacturing methods  became available in the 1920s and prohibition increased  demand for tequila, just as the demand for Canadian whiskey increased at that time. Following World  War II, the availability of distilled spirits from Europe diminished, which also  increased tequila’s popularity. The late 1940s saw the first modern efforts to regulate the industry, culminating in the establishment of the Norma Oficial Mexicana (NOM) in the 1970s. The NOM is the official tequila law. It states that legal tequila can only be produced in an area within roughly two hundred  kilometers of Guadalajara. The NOM also states that legal tequila must be at least 51% blue agave. Premium tequilas, like 1800, are  usually 100% blue agave  and are proudly labeled so.