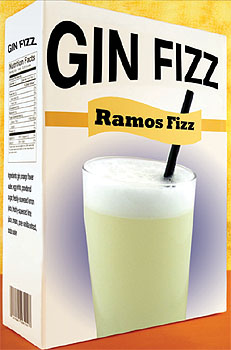 The life and times of the Modern Mixologist

George had just sat down for Sunday brunch, craving his favorite corned beef hash with three poached eggs, when the waiter approached with coffee and the offer of a Ramos Fizz. “A Ramos Fizz. . . I’m not familiar with such a concoction.” He was quickly informed that it is a classic breakfast drink made from gin, cream, sugar, citrus juice, egg white, and orange flower water. The ingredients are shaken hard and fizzed with soda. Being the adventurous type and not one to miss an opportunity to experience something new, he eagerly accepted the offer. George found it to be light and fluffy, nicely balanced with just the slightest floral hint of orange blossoms, and it went great with his hash. Wanting to know more, he discovered the drink was first mixed in New Orleans, which was all he needed to persuade him to make a trip to the Big Easy.

George checked in at the Monteleone and found his way to the hotel’s Carousel Bar. There he met Marvin, bartender extraordinaire, and ordered a Ramos Fizz. Marvin informed him that the drink was indeed created in New Orleans by Henry C. Ramos in 1888, at his Imperial Cabinet Saloon located at the corner of Gravier and Carondelet streets. Ramos employed a host of shaker boys to properly shake these gin fizzes into a ropey, frothy brew, prompting one customer to say, “It’s like drinking a flower!” But then came Prohibition and the drink disappeared. After Prohibition was repealed, the trade name of Ramos was acquired by the Hotel Roosevelt and the Ramos once again became a huge hit. Marvin suggested George make a point to stop in at the Sazerac Bar at the Roosevelt and try one for himself. 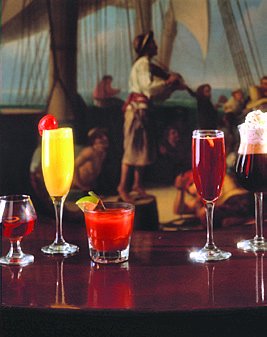 As he walked into the art deco setting of the romantic Sazerac, George felt as if he had been transcended back in time. Approaching the bar, he was greeted by a sharply-dressed barman named Russell who prepared a delicious fizz for him. The barkeeper told of the infamous Louisiana Governor Huey P. Long’s preference for the Ramos Fizz. The story is that he was such a fan of the drink, when he visited the New Yorker Hotel he brought along his own bartender from New Orleans to prepare them. George thought that seemed very civilized indeed. After a second Ramos Fizz, he was ready to call it a night but not before stopping at Lucky Dog for another New Orleans’ specialty.

The next morning found George walking the French Quarter where he happened upon the Court of Two Sisters. After ordering a Ramos Fizz, he mentioned to the bartender, Linda, how wonderful it was. “That’s Ms. Flo’s recipe,” she said; “she put her special twist on it!” It turns out Ms. Flo Woodard had recently passed away but had held court behind the bar here since the 1970s and was one of the first women to work behind the stick in the Crescent City. George was starving and Linda recommended he try the traditional New Orleans’s breakfast at Brennan’s.

At Brennan’s bar, George was greeted by barman Blake Kaiser, who quickly whipped up a fizz for him. Kaiser suggested he try the Table d’hôte Breakfast, which is their three-course prix fixe. George began with a New Orleans classic, turtle soup, followed by a Brennan’s creation called Eggs Hussarde, which is poached eggs atop Holland rusks, with Canadian bacon and Marchand de Vin sauce. For dessert (yes, dessert for breakfast), he had to try another Brennan’s original, Bananas Foster.

Full and very happy, George was ready to return to Las Vegas with fond memories and a new-found love for a lost and forgotten classic.

Shake very vigorously with ice for at least one minute or until your arm gets tired. Strain into a tall, thin glass (Fizz Glass) and top with chilled soda water. Stir.

DIAGEO had a happy hour for the ages at Tales of the Cocktail
Interpretations of the most influential cocktails from the 1900’s through today were created by a distinguished group of mixologists.

Read more about that here.