The InterContinental Miami offers you a tantalizing selection of fine dining options. Savor a gourmet meal with harp or jazz music in the background in our Indigo Restaurant and Bar. Whether you dine in the sycamore-paneled lounge, the aquamarine-tiled bar, or the glass-enclosed wine room, be sure to consult the extensive wine list that includes libations from France, Spain, and Chile. 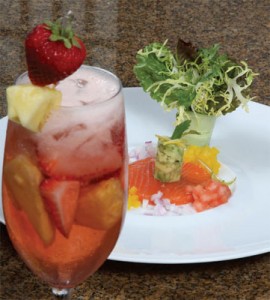 1. 2 # of royal cut smoked salmon cut in to ½ inch cubes
Marinate with diced red onions espalete chili pepper, lemon, lime zest and a squeeze of lime juice; set aside
Make pulp out of 2 avocados and season with lime juice, salt, pepper, and cilantro, touch of garlic and finish with extra virgin olive oil.
2. Pipe avocado mousse in a bowl. Place cubed salmon on top and garnish with radish sliced micro cilantro and a sprinkle of espalete chili pepper

Sangria with a Twist 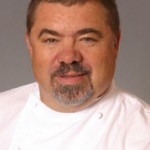 Feher is an internationally-recognized expert in culinary arts. Chef Alex has been Executive Chef at the IC-Miami since 2000, coming to his post from InterContinental properties ranging from New York and Montreal to Frankfurt and Dubai. Throughout his distinguished career, Chef Alex has received numerous awards and honors including an Olympic gold medal in culinary skill in 1978 at the culinary Olympics in Frankfurt, Germany. In 1993, he won first prize for Chef of the Americas Award for the American Harvest Competition. A member of the Chaîne de Rôtisseurs and Vatel Club of New York, he was awarded the “Chef of the Year Award” for New York’s tri-state area in 1995 and 1999. In 1990 Chef Alex received his certificate in Spa and Health Resort Management and Cuisine from Cornell University. He also holds a Master’s Degree in Culinary Skills. 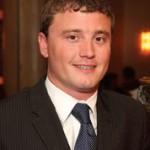 Deville came to the hotel from Sandestin Golf and Beach resort almost three years ago. Since coming to IC-Miami, Jason has worked as Assistant Restaurant Manager and currently holds the position of Beverage
Manager. He is responsible for beverage service throughout the hotel, from cocktail offerings and wine lists to beverages for room service and banquets. Jason holds a first level certification from the Court of Master Sommeliers as well as a Bachelor’s Degree in Hospitality, Recreation and Resort Management from the
University of West Florida. 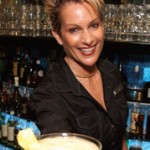 Scorza, a twenty-five-year veteran of the InterContinental Miami and heart and soul of the hotel’s Indigo Bar, holds the title of Head Bartender. Known for her “crazy” but inspired concoctions and the ability to create perfect, individualized drinks for anyone on the spot after a brief conversation, Joey has won a loyal following of both guests and Miami locals. Joey gets her abundance of energy from seeing the expression on a person’s face when they taste their very own drink. She is extremely passionate about bartending and it always shows in her specially-developed cocktails.