George found himself in downtown Detroit on a cold and snowy December evening, and after his long flight, very much in need of a warming tipple. Sitting in the back of a cab, George inquired as to where one might find a stiff drink and a good dinner in a traditional local landmark. The driver replied that the place to go was the Caucus Club inside the Penobscot building on West Congress Street. “Sounds perfect. What’s their specialty?” George asked. “Try a Tom & Jerry; it’s guaranteed to warm you up,” replied the cabbie.

Once inside George quickly found a seat at the long bar and ordered a Tom & Jerry from the barkeeper. “It’ll just be a minute,” the barkeep said as he left the bar and headed to the kitchen. Momentarily he returned with a steaming hot mixture of egg batter, rum, and brandy. George found it indeed warmed him from head to toe, if not from the drink’s temperature then surely from the amount of alcohol contained within. “Well?” inquired the bartender. “Very good indeed. Now what shall I eat?” George replied. “We are famous for the perch that we get locally from Lake Huron.” George found the perch to be light, sweet and flaky, lightly breaded and sautéed perfectly. After a final Tom & Jerry, he asked the bartender if anyone else made Tom & Jerry’s. “You have to go to the Brass Rail in Port Huron; they’ve been making them there for over 70 years.” 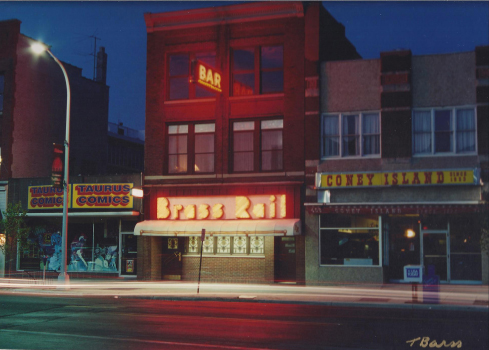 The next day George hired a car and headed east on I-94 where he found the Brass Rail on Huron Avenue in downtown Port Huron. Upon entering the bar, he was taken by the myriad of decorations adorning the walls and the large, colorfully decorated Christmas tree taking over the back bar. He grabbed the last open stool in the busy bar and inquired of the bartender if they made Tom & Jerry’s. “Make them? Helen David opened this bar in 1937 and we’ve been making them with her recipe ever since!” he exclaimed. It turns out the guy behind the bar was Maroun Abou-Ghanem, Helen’s cousin and the bar’s current owner. Maroun told George the key was to make a fresh egg batter to which rum, brandy, and hot water are added and the whole thing is topped with grated nutmeg. “It’s a holiday specialty we start serving just prior to Thanksgiving and finish on New Year’s Day. We sell thousands of them!” he said. George found the Tom & Jerry to be light, fluffy, rich and creamy; it made him feel warm and fuzzy inside. “This is delicious; I’ll have another!” he said. George finished his final Tom & Jerry, said goodbye to Maroun, and popped into the Coney Island next door to get a couple of their world famous hot dogs for the trip back to Detroit, but he was determined to get to the bottom of this legendary tipple. 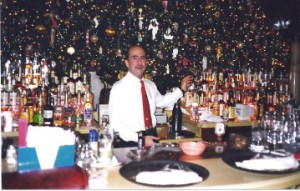 It turns out that the grandfather of American bartending, “Professor” Jerry Thomas, is credited with developing the Tom & Jerry. According to his 1862 publication, The Bar-Tender’s Guide on How to Mix All Kinds of Plain and Fancy Drinks, this seasonal drink was not to be offered until after the first snowfall. As wonderful a story as that is, it seems the drink was actually named for the characters in Pierce Egan’s 1821 book, Life in London, which chronicles the after-hours roving antics of “Jerry Hawthorn, Esq., and his elegant friend Corinthian Tom.” Their relentless pursuit of living the high life, frequently with the aid of an alcoholic beverage, gave birth to the slang term, “Tom and Jerrying.” It is said that Egan took a recipe considered to be a twist on the traditional eggnog and named it the “Tom and Jerry” in order to publicize his book.

Separate egg whites and yolks. In a large mixer, beat yolks until thick. Transfer to another bowl. Clean mixer and add the egg whites and cream of tartar; beat until stiff. Add powdered sugar and fold in yolks. Mix until batter is light and fluffy.

In a preheated mug, add 1 heaping ladle of batter. Add rum and brandy. Top with hot water and dust with freshly grated nutmeg. Serve with a paddle or spoon.