October 7th – What a privilege it was to attend a once in a lifetime affair at the Charles Krug Winery in Napa, California with my husband, iMi Agency founder and CEO Don Billings, as Morton’s The Steakhouse and the Mondavi Families came together, all in the name of charity. More than $110,000 was raised for the Make-A-Wish Foundation® at the event, which was the culmination of the “Prime Events at Morton’s” series that began earlier in the year. It was a gorgeous, sunny fall day as the cocktail reception commenced at 4:30 in the afternoon. Guests soon made their way to The Carriage House for the seated dinner, which was broadcast live to Morton’s private dining rooms across the nation creating a virtual 4-course wine dinner with the entire extended Mondavi family and more than 1,500 guests. 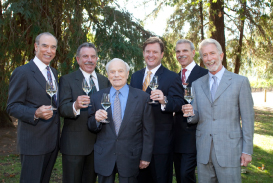 Tylor Field, III of Morton’s The Steakhouse served as the evening’s emcee. I must say he did an extremely impressive job during the broadcast. I think there is immense promise for him as a television host if he ever tires of wine and spirits…I’m just sayin’! He looks great on camera, speaks very well, and has that wonderful quality, charisma, which is so appealing. Bravo, Tylor! 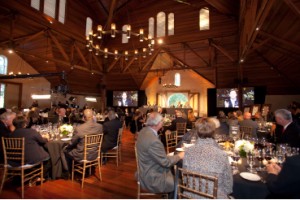 Following dinner, the live auction fired up and included the show piece of the night – a 27-liter bottle of “Siamo Insieme 2008” the first-ever red wine produced by the second and third generations of the Mondavi family. It is a unique blend of Cabernet Sauvignon, Merlot, Cabernet Franc, and Petit Verdot. One lucky and most big-hearted bidder claimed this rare bottle of wine as his own for a mere $25,000.

“We are thrilled that we were able to bring the extended Mondavi family together with more than 1,500 people nationwide for this unique charity event,” said Morton’s VP of Wine & Spirits, Tylor Field III. “The money we were able to raise speaks directly to the generosity of our guests, and we couldn’t be prouder that they stepped up in this way.”

I’d like to personally thank Jamie Conahan of Folio Fine Wine Partners for inviting us to this
remarkable occasion. It was an evening for a grand cause that we won’t soon forget.

Portions of article provided by Morton’s The Steakhouse