What are the holidays without cool, refreshing, festive eggnog? For a classic twist, read on…

It turns out that the grandfather of American bartending, “Professor” Jerry Thomas, is credited with developing the Tom & Jerry. According to his 1862 publication, The Bar-Tender’s Guide on How to Mix All Kinds of Plain and Fancy Drinks, this seasonal drink was not to be offered until after the first snowfall.

As wonderful a story as that is, it seems the drink was actually named for the characters in Pierce Egan’s 1821 book, Life in London, which chronicles the after-hours roving antics of “Jerry Hawthorn, Esq., and his elegant friend Corinthian Tom.” Their relentless pursuit of living the high life, frequently with the aid of an alcoholic beverage, gave birth to the slang term, “Tom and Jerrying.” It is said that Egan took a recipe considered to be a twist on the traditional eggnog and named it the “Tom and Jerry” in order to publicize his book. 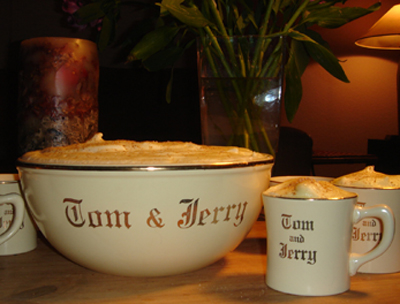 Separate egg whites and yolks. In a large mixer, beat yolks until thick. Transfer to another bowl. Clean mixer and add the egg whites and cream of tartar; beat until stiff. Add powdered sugar and fold in yolks. Mix until batter is light and fluffy.

In a preheated mug, add 1 heaping ladle of batter. Add rum and brandy. Top with hot water and dust with freshly grated nutmeg. Serve with a paddle or spoon.

We hope you enjoy your double tipple for the holidays. We’ll see you next week for a New Year’s Eve tipple.

Feel free to contact us with your favorite tipples. Use the comment section below or find us on Facebook or Twitter. And there are plenty of holiday cocktails over on the in the Mix site. Check those out and let us know your favorites!