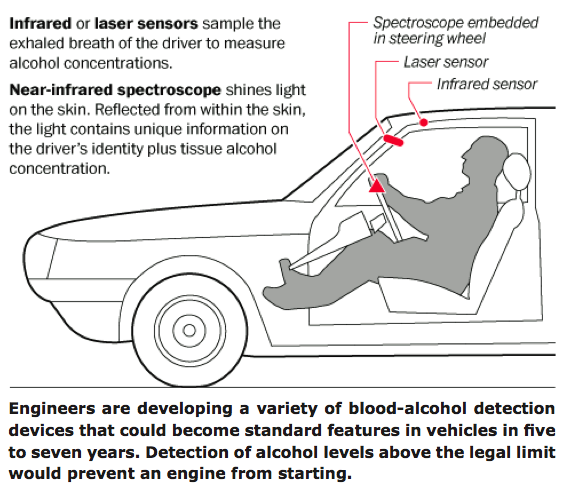 The technology developed in the past decade to sniff out terrorist bombs eventually could be used to combat another scourge: drunk drivers.

Researchers funded by auto manufacturers and federal safety regulators are working on sensory devices — to be installed as standard equipment on all new vehicles that would keep a vehicle from starting if the driver has had too much to drink.

“We’re five to seven years away from being able to integrate this into cars,” said Robert Strassburger, vice president for safety for the Alliance of Automobile Manufacturers, a trade group for the world’s major auto companies.

The new technology would not require that the driver blow into a tube, like the interlock devices some states require after drunken-driving convictions. Instead, either a passive set of sensors permanently installed in the vehicles or touch-sensitive contact points on a key fob or starter button would immediately register the level of alcohol in the bloodstream.

Less clear is whether such technology — which presumes that all drivers are potential drunks — will antagonize some car buyers, and it’s uncertain how much it would cost.

But that’s a marketing problem for down the road.

Alcohol was a factor in 10,839 highway deaths in 2009. In the past two decades, it accounted for 268,442 deaths. And 10 percent of people in the United States recently admitted to being drunk behind the wheel in the past year, a poll found.

Drunken driving “remains the leading cause of fatalities on America’s roads, killing more than 10,000 people in 2009,” said David Strickland, administrator of the National Highway Traffic Safety Administration. The “technology presents a new opportunity for us to dramatically lower drunk-driving deaths and has the potential to save literally thousands of lives every year.”

Strassburger, whose group is part of the development task force, said the goal is to have an operating model in two years.

The objective is to produce a device that will react in less than a second and function without maintenance for a least 10 years or 157,000 miles. “We haven’t met our criteria yet, but we feel comfortable that we will,” said Susan Ferguson, a longtime safety expert who is leading the research. “Speed, accuracy and precision are the three key criteria.”

Right now, she said, the sensors that detect alcohol levels in the air can be made to react within five seconds after a driver gets into the vehicle. The touch-detection system currently takes 20 to 30 seconds to determine blood-alcohol content.

“But the next generation of solid-state electronics will bring it down a lot,” she said. One detection method could collect data via infrared beam. The sensors have proven accurate, but consistent, repeatable accuracy needs to improve.

Strassburger said the cost per vehicle hasn’t been established, “but obviously it has to be relatively low.” It “has to be in line with other safety systems,” he said. “We want the public to understand the need and how they benefit.”

The technology is a direct offshoot of the quantum advances in sensory detection since the Sept. 11, 2001, terrorist attacks. The ability of machines to scan people, packages and luggage for tiny trace elements that would expose a terrorist threat has expanded exponentially.

“Now your typical explosive trace detection system is based on rapidly evaluating minuscule molecular substances,” said Richard Bloom, an anti-terrorism expert who chairs the Aviation Security and Emergency Management Committee of the Transportation Research Board. “If you can do that with explosives, you should be able to do that with any kind of detection, including alcohol and drugs.”

Telltale devices that determine when someone has been drinking have been developed in the past decade and are in widespread use. One celebrity, Lindsay Lohan, has worn a SCRAM bracelet, which measures blood-alcohol content every 30 minutes through a person’s perspiration. For the same type of technology to be used in cars, researchers want a response within one-third of a second.

The task force developing the system is a partnership between the Automotive Coalition for Traffic Safety and NHTSA. The initial $10 million research grant, provided by NHTSA and carmakers, paid for the first two years of research. More money from Congress is being sought so the project can continue for the final three years, becoming something that functions consistently in a vehicle.

“We’re not at the finish line, but we can see the finish line,” said Chuck Hurley, a longtime safety advocate who recently retired as chief executive of Mothers Against Drunk Driving. It “will take us about $12 million more per year. The public needs to get behind this.”

The new technology could collide with the desire of many people who want to have a drink or two without fear that they won’t be able to drive home.

Automatic speed cameras have been around for several years. Although speeding leads to about 13,000 highway deaths a year, state legislatures have been reluctant to deploy the cameras in numbers significant enough to slow traffic.

Given that a poll found that 10 percent of Americans said they’d driven drunk in the past year — and 5.5 percent of them said it was more than once — will there be political resistance to a device that would have required one in 10 Americans to call a cab or walk home?

“It establishes a situation where you are guilty until proven innocent every time you get into your car,” said Sarah Longwell of the American Beverage Institute, which opposes universal use of the devices. “Most Americans would say: ‘Absolutely not. I don’t drive drunk, and you’re not going to put that in my car.’“

Longwell said her group would back universal use if devices were set at the legal 0.08 drunken driving threshold, but she believes they will be set far lower. “Americans are 100 percent behind the fact that you shouldn’t drive drunk,” she said. “But they’re not ready to give up the glass of wine with dinner, the beer at a ballgame or a champagne toast at a wedding.”

But Hurley said the aim is to stop drivers whose blood-alcohol content exceeds the limit. “If we were really neo-prohibitionists, you’d know it,” he said.

Longwell, who has lobbied widely against mandatory interlock laws, said advocates of universal use fear public reaction, and should. “The car companies, no matter how much they are supporting this now, they’re not going to do it if people are furious about it,” she said.