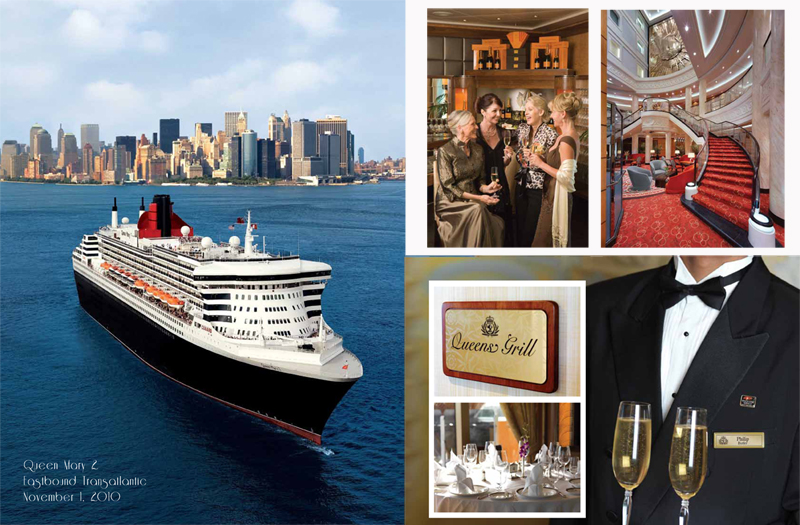 Consider the proverbial “bucket list” – places to see and things to do during the course of your lifetime. Are your mid-forties too early to embrace such a list and forge ahead? I think not! I say jump on it as soon as you possibly can and let the adventure begin.

This was exactly my angle last November as my best travel partner, Don, and I flew to New York and headed to the Brooklyn Cruise Terminal for an adventure I had been dreaming about for years – crossing the Atlantic Ocean to Southampton, England in Old World style on Cunard’s monolithic Queen Mary 2. A good friend of mine had taken the voyage earlier in the year and assured me I would love it. Don, of course, had made many crossings in his early career.

The Queen is magnificent and unsurpassed in sheer luxury and sleek design. It is a sight to behold, being the size of an aircraft carrier and as long as the Empire State Building is tall. Guest capacity is a whopping 2,620 with a crew of 1,253. She was introduced in 2004 and is carrying on the long desired traditions of the Golden Age of ocean travel. Cunard is now owned by Carnival Cruise Line, but make no mistake – the aura of the crossing is distinctly British and was a breath of fresh air for us. Many of the guests are repeat passengers who make the crossing at least once a year and have a real passion for the sea and for the rough conditions the Atlantic can often deliver.

Our Deck 9 Cabin #9010 was certainly spacious, at just over 500 square feet. The first thing I noticed was the full bar, fridge, and cabinets filled with Riedel crystal stemware. Beyond that, a lovely sitting area led to the balcony. The bedroom connected with the sitting room and just to one side was a large walk-in closet and a perfectly-lit vanity area. The bathroom was also huge and featured a combination shower/whirlpool tub. I could definitely get used to this.

We partially unpacked, then headed down two decks (there are 14 decks on this ship!) to the Queen’s Grill for lunch. Deck 7, D Stairway, Starboard side, and we were there. I politely pleaded with Senior Maitre d’ Benjamin Acler to seat us with interesting, chatty people. The whole idea of dining with the same people for a whole week made me nervous, especially if they were boring or we had nothing in common. My worries quickly faded, however, when we were seated at Table 51 and introduced to our new friend Einar, a Norwegian opera singer who lives in New York City. Shortly thereafter, Richard and his father John from Massachusetts joined us. Michael, a university dean from Wales, was present for dinner that evening and I was happy to have some female company when Patsy and John from England joined our table a few days later. It was one of the best tables at sea ever created, I am convinced; these fascinating and kind people with so many stories to tell truly made this crossing memorable and I felt a certain sadness in saying goodbye to our newfound comrades at the end of the cruise.
The food and beverage service, quality, and options truly shine through on the Queen. She has four classes of dining available to guests, depending on which category cabin they book into: Britannia, Britannia Club, Princess, and Queen’s Grill respectively. There is also a Todd English restaurant onboard, which features innovative Mediterranean cuisine.

King’s Court, the casual dining venue for breakfast and lunch, is cleverly divided into four theme restaurants: La Piazza, The Carvery, Lotus, and the Chef’s Galley. The Golden Lion is the ship’s signature English pub, serving favorites such as Fish and Chips and Bangers and Mash. The Queen’s Room is the place for afternoon tea served by white-gloved waiters. Finally, the Boardwalk Café offers casual dining, weather permitting, and serves grilled items such as hot dogs and hamburgers. There is literally something for all tastes and occasions on the QM2.

Many onboard activities were seamless and compatible with our love for all things food and beverage whilst travelling. On any given day during the crossing and much to our delight, unique beverage services, tastings, and classes were offered, including “An Exclusive Event” offered in the spectacular Veuve Cliquot lounge and pairing the French standout with canapés. How about “The Art of Mixing Martinis” in the Commodore Club? Attendees learned about the art of the Martini including its past history, present and future, and a glimpse into the exclusive world of Molecular Mixology. There was also a “Single Malt Whisky Tasting” as well as a “Rums of the Caribbean” tasting where rums from all over the Caribbean islands were sampled and analyzed.

Long lunches were enjoyed each and every day with our Table 51 mates, which often segued directly to the afternoon tea service. Perhaps a steam and massage at the excellent Canyon Ranch Spa Club would be a possibility for a mid to late afternoon activity, followed by a long nap or one of the Beverage Team’s tasting seminars. Canapés were delivered to our suite in the early evening, in which we happily indulged with a cocktail made with Grey Goose or Tanqueray while attempting to dress formally for dinner and one of the Royal Nights themed balls. A pre-dinner cocktail in the Grill’s Lounge was always wonderful and allowed us an opportunity to meet so many lovely people of all ages from across the globe. Dinner was 8ish and we would typically close down the Queen’s Grill around 10:30 or so, just in time to head to the Queen’s Room Ballroom for a spin around the dance floor to the Big Band sounds of the orchestra complete with a Harry Connick, Jr.-like crooner. Gentlemen hosts on board made sure all single ladies had their turn on the dance floor. It was a fascinating and refreshing sight to behold, with everyone dressed to the nines in tuxes and cocktail attire.

Altogether it was a magical week that harkened back to the Golden Age of ocean travel and one the happiest of my life so far. I’ll treasure the memories forever. I’m so glad we had this time together.