Garnish: 1 blackberry and 1 blueberry skewered by sprig of thyme. 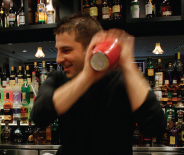 Jason has over 20 years of experience in the beverage/service industry, covering the full spectrum of venues. He has held nearly every front-of-the-house position that exists in the business, all the way up to General Manager. He has been a corporate bar trainer for notable chains such as Outback Steakhouse, Longhorn Steakhouse, Dave & Buster’s, and Bahama Breeze. In March of 2005, Jason began working for Southern Wine & Spirits of Arizona and quickly began honing his skills as a craft bartender under Master Mixologist Francesco Lafranconi.