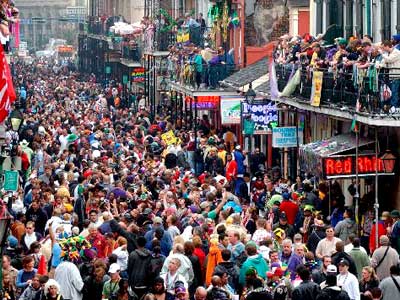 The Hurricane is a sweet drink made mostly of rum and fruit juice. It is said to have debuted at the 1939 World’s Fair and was named after the hurricane style glass it was served in.  The more popular theory is that Pat O’Brien created it in the 40’s to alleviate all the overstock of rum that distributors forced on him. He made the drink in hurricane glasses and was said to have gave it away to sailors visiting New Orleans. Well, the drink caught on, and the rest is history as they say.

There are a lot of recipes for this cocktail; this is one I have found that works well. 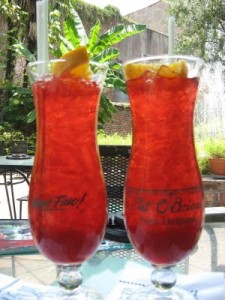 Orange slice and cherry for garnish

1.     Squeeze juice from half a lime into shaker over ice.

2.     Pour the remaining ingredients into a Boston cocktail shaker.

4.     Strain into a hurricane glass over fresh ice.

What does Mardi Gras mean in English? Fat Tuesday!!!

What do the Mardi Gras Colors of purple, gold and green mean?

The colors of Carnival were chosen in 1872 by that year’s Rex. By some accounts, the colors were chosen because Rex thought they looked good together. Twenty years later, for the 1892 parade, Rex declared that the colors had meaning: purple for justice, green for faith and gold for power.