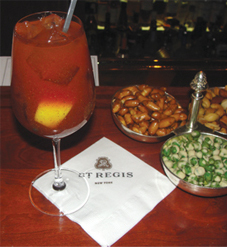 A sneak preview of Tony Abou-Ganim’s story in the upcoming spring magazine, Coming to America…Vodka’s Journey

Quiz Question – An excerpt from Tony’s story is the quiz question today…It turns out the man who first mixed the Bloody Mary was an American barman by the name of Fernand “Pete” Petiot, who concocted the fabulous drink while working at Harry’s New York Bar in Paris during the 1920s. When prohibition was repealed, the Astor family invited Mr. Petiot to come to New York as the head bartender of the King Cole Bar. Pete brought his Bloody Mary with him, but the name was deemed just too vulgar for the elegant bar so it became known as the _______WHAT?

Answer is in the story…


Quote of the day – “That’s like saying Prada’s are just shoes or vodka is just a morning beverage.”

–Megan Mullally as Karen Walker of Will and Grace