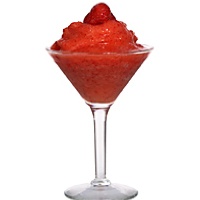 Add all ingredients in a blender and blend until smooth. Garnish with strawberry.

**The Daiquiri, created in Cuba in 1900, is a versatile cocktail that can be adapted to almost any flavor off the base drink.

WHITE – Piña Colada (Use vodka to create a Chi-Chi)

Blend with a cup of cracked ice until creamy. Pour into a 14 oz goblet and garnish with a pineapple spear.

Excerpt from Tony Abou Ganim’s article in summer 2010 in the Mix. His popular articles, using his character “George,” as the curious world travelling imbiber are a hit with readers… After checking into the Caribe Hilton, George headed to the bar where he met Rafael, a barman at the Caribe for the past 20 years. Rafael prepared for him one of the hotel’s famous Piña Coladas. He told George that yes, the Piña Colada was indeed invented at the Beachcomber Bar there at the Caribe Hilton, on August 15, 1954, by Ramon “Monchito” Marrero. He pointed to the window where a plaque had been etched in the glass to commemorate the accomplishment. He said it was not a coincidence that 1954 was also the year that Coco Lopez began making their coconut cream as well.

Combine all ingredients in a Boston shaker with ice, shake well. Strain into a hurricane or collins glass with crushed ice. Enjoy!

As legend has it, the Blue Hawaii was invented in 1957 by Harry Yee, legendary head bartender of the Hilton Hawaiin Village in Waikiki, Hawaii when a sales representative of Dutch distiller Bols asked him to design a drink that featured the blue color of their Curacao liqueur.

And a Punch for good measure! 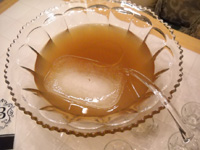 Fish House Punch, arguably the drink of choice on the original 4th July…

Combine ingredients in a pinch bowl over a large block of ice. Garnish with sliced peaches and fresh mint.

An excerpt from David Wondrich’s Esquire column…The Wondrich Take. Back in 1732, a selection of Philly bigwigs ganged together to start a club; they called it, for reasons best known to them, the State in Schuylkill Fishing Corporation. They built themselves a house on the banks of the “Skookul,” as it’s pronounced, concocted themselves an official punch, and set to it. Fish. Drink. Eat. (The club’s still around, so they must have been doing something right.)

Their punch caught on pretty much right away, and small wonder: This refreshing tipple is so tasty that you’ll want to put away about a quart of it, and so strong that after you do you’ll forget where your pants are — even if you happen to still be wearing them, which is by no means certain. But we digress.

1. What was the site of the writing of the Declaration of Independence called?

A. The Graff House
B. Market House
C. Independent House

2. Who was the first resident of the White House?

3. Who drafted the Declaration of Independence?

George Washington’s distillery was the largest in America at one time, producing 11,000 gallons of whiskey in 1799, making it one of the most successful economic enterprises at Mount Vernon.

Thomas Jefferson has been described as America’s “first distinguished viticulturist,” and “the greatest patron of wine and wine growing that this country has yet had.”