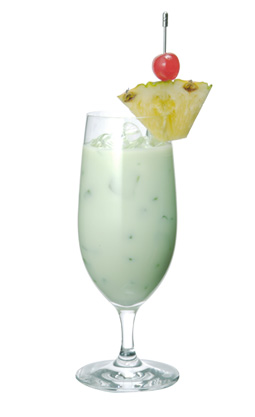 Blend ingredients with crushed ice, and pour into a glass.
Tip – Try serving frozen in an ice cream cone as a stylish dessert!

Some theories state that “piña colada” means “pineapple covered hillside,” but it actually gets its name from the Spanish for “strained pineapple.”

The piña colada is one of America’s favorite cocktails, and can be easily made by mixing white rum with piña colada mix.

One theory says that Ramon Portas Mingot first created the piña colada at a bar called Barrachina in Puerto Rico’s San Juan, but another claims that it was invented earlier by Ramon Marrero Perez of the neighboring Caribe Hilton Hotel.

Either way, the cocktail made its way through Miami to New York, and then around the world. The MIDORI Colada, a variation on the piña colada, is an elegant cocktail with a pastel green color and a subtle melon aroma.