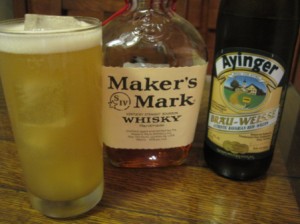 Combine everything except beer and garnish in a cocktail shaker; smush the marmalade around to help it dissolve in the liquid, then fill shaker with ice and do what comes natural. Strain into highball glass (I filled mine with ice, but give it a try without if the idea of pouring beer over ice skeeves you out), and top with chilled beer.

When you come right down to it, the Weissen Sour is an amazingly simple drink: just a basic whiskey sour with the tweak of adding orange marmalade (if you’re playing along with the name game, I suppose that’s a tour through the Omar Bradley with a tip of the hat to the Marmalade Cocktail, though now it’s getting complicated) and orange bitters, then tossing the thing in a highball glass (with ice? I neglected to ask Kevin, so I went for it, though in hindsight it might have worked better with crushed ice rather than big cubes), and finishing it with a punch of chilled weisse beer.

As anyone with an occasional (or frequent) boilermaker habit can tell you, bourbon loves the hell out of a cold, crisp beer, and as we head into mid-July, few beers are crisper or more appealing than a decent weisse. For this drink, I used Maker’s Mark (wheated bourbon, wheat beer…) and Ayinger Brau-Weisse for the beer. I’m not sure if I wound up trampling all over Kevin’s original recipe for the drink, but I’m pretty pleased with the result: the gently sweet fruitiness of the marmalade is a great bridge between the richness of the bourbon and the flowery aromatics of the beer, and the mixture is simple enough that you don’t feel anything is going over the top.