This week marks the anniversary of two of the worst hurricanes to hit the US ever. Hurricane Andrew in 1992, a Cat5, devastated South Florida. Hurricane Katrina in 2005, a Cat3, did untold damage to the coastlines of Louisiana, Mississippi and Florida and caused the levies to break, flooding our beloved city of New Orleans.

We offer a toast to a safe and uneventful hurricane season this year!

Test your hurricane knowledge below. 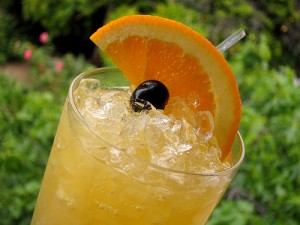 The Original HURRICANE COCKTAIL
Adapted from the original recipe as seen in Beachbum Berry Remixed, by Jeff Berry. 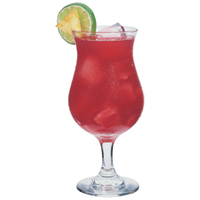 Q. Hurricanes have devastating power. What facet of the storm usually causes the most damage?
a. Wind
b. Rain
c. Storm surge – The worst hurricane damage is often caused by a storm surge. A storm surge is like a giant wall of water pushed onshore by hurricane winds.

Q. True or False:
A tropical storm is classified as a hurricane once winds goes up to 74 miles per hour or higher. – True