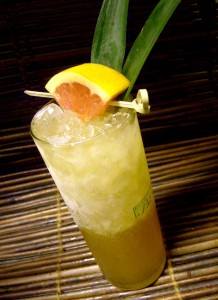 Blackbeard, was a notorious English pirate who operated around the West Indies and the eastern coast of the American colonies. His ship was Queen Anne’s Revenge and from 1717 to 1718 he became a renowned pirate. His cognomen, Blackbeard, was derived from his thick black beard and fearsome appearance; he was reported to have tied lit fuses under his hat to frighten his enemies. Source

Mix in cocktail shaker with a glass-full of crushed ice. Then pour everything back into glass.