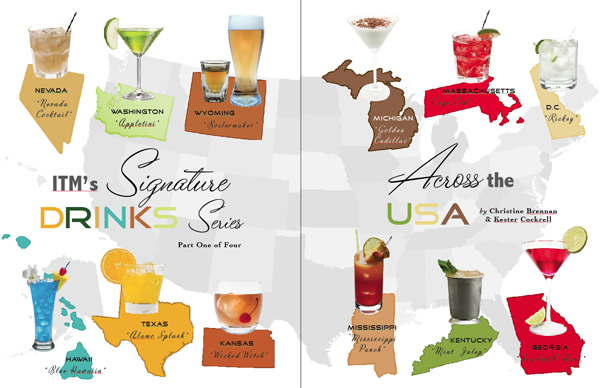 Watch Out For the Grizzly Bears!

Watch out for the grizzly bears! Home of Yellowstone National Park, Wyoming is visited by nearly 3 million people each year. While the state offers many attractions such as daring ski slopes and miles of beautiful forests, the main appeal can be seen 145 feet in the air about every 91 minutes, Old Faithful. Water boils up to the surface and releases thousands of gallons of spray into the air. This geyser has attracted over 60 million visitors since 1872.

Preparation:
1. Pour a shot of whiskey in a shot glass.
2. Fill a pint glass with beer. Consume some to make room for the shot.
3. Drop the shot glass into the beer and down everything in one drink.

Off the north shore of Oahu, Hawaii’s third largest island, you will find some of the world’s top surfers. The Banzai Pipeline at Waimea Bay is one of the world’s most famous and dangerous surf locations, with waves sometimes reaching up to 30 feet high. It is the dream surf spot for pro surfers and home to the Pipe Masters, an annual competition that draws together the top 60 surfers in the world as they compete for the top prize.

Preparation:
Combine all ingredients and mix well. If using ice, mix the ingredients in a blender. Serve in a tall glass. Garnish with a slice of pineapple and a cherry.

As the largest city in Michigan, Detroit got its reputation as “Motor City” during the 1930s. It became a ray of light for American capitalism during a time of economic hardship as the city developed into the prime location for automobile growth. Surrounded by lakes, Detroit businesses had the ability to maneuver product with ease. This feature, along with the abundant amount of coal and iron mining nearby, encouraged more than 125 automobile companies to set up shop in the city, thus creating the foundation for Detroit’s Motor City.

Frankly My Dear, I Don’t Give a Damn

At the heart of the golden age of Hollywood lies Gone with the Wind, a story about a young woman with everything to lose as the Civil War collapses the world around her. Even though it won the 1939 Academy Award for best picture, the greatest honor would be bestowed by Jimmy Carter, who said later in life that, “Gone with the Wind was the biggest event to happen in the South in my lifetime.” As one of the most enduring films of all time, it has grossed nearly $1.5 billion and is noted as one of the top ten movies of all time.

Preparation:
Put all ingredients in a shaker and pour. Garnish with lime wheel.

Like martinis, apples come in all different flavors and colors. Washington produces more than 60 percent of the nation’s apples; that’s over 4 billion pounds of apples each year! With no machine to help with mass gathering, each apple is picked by hand. So whether you prefer the sweet taste of a Red Delicious or the tart tang of a Granny Smith, chances are you’re eating one of the 2,500 different types of apples produced in Washington.

Preparation:
Into a cocktail shaker, pour the Vodka, Sour Apple Schnapps and apple juice. Add a few ice cubes. Shake well. Strain and pour into a martini glass. To finish, garnish the rim of the glass with the slice of green apple.

Well, for those of you who don’t, here’s the overview. Originally constructed as a home for missionaries, the Alamo became a military base during the Texas Revolution. On February 23, 1836, in the midst of the war, Mexican forces arrived in San Antonio and began an attack on the Alamo. The battle lasted thirteen days and resulted in a complete destruction of the Texan forces. While only two natives survived the battle, the Texans were able to take one third of the Mexican Army down with them, thus helping secure Texas’ victory for independence.

Preparation:
Mix with cracked ice and strain into glass.

One of the first places settled by the English in North America, Cape Cod is now a summer escape for the people of Massachusetts. In 1620 the Mayflower stopped just off the shore of the Cape, in an area now known as Provincetown. Settlers stayed for a month before locating to the renowned Plymouth Rock. The peninsula itself was created by melting glaciers, and with over 500 miles of coastline, it is home to a massive fishing industry and renowned whale watching.

Preparation:
Combine in a highball glass with ice. Garnish with a wedge of lime, and serve.

Riders Up and They’re Off!

Horseracing has been a way of life in Kentucky since the early 1800s. Churchill Downs is the home of the Kentucky Derby, the largest horseracing event in the United States. Beginning in 1875, the race is now attended by more than 155,000 people each year. Big hats, bright colors, and mint juleps are signature sights at any race. Over the course of the weekend, 120,000 mint juleps – over 9 thousand liters of drink – are served. If you’re going all out, order the $1,000 mint julep, served to you in a sterling silver cup; proceeds go to the Thoroughbred Charities of America.

Preparation:
Bring the sugar and water to a boil in a saucepan and boil for 5 minutes; do not stir. Pour over the 12 sprigs of mint in a heatproof bowl, gently crushing the mint with the back of a spoon. Chill, covered, for 8 to 10 hours. Strain, discarding the mint. You may store the syrup in the refrigerator for several weeks, preparing individual juleps as desired.

What Happens in Vegas, Stays in Vegas

Nevada’s famous city, Las Vegas, is the only place in America where you can get married, spend your life’s savings, get lost in the desert, and have that night be called “tame.” The city has come a long way since the first casino, Pair-o-Dice Club, was opened in 1931. The strip is home to 19 of the country’s largest hotels, over 100 pools with some stretching as far as 11 acres, like the one found at Mandalay Bay, and a 203-foot roller coaster that drops you at 67 miles per hour. In the city that never sleeps, you get to enjoy a Nevada Cocktail anytime of the day.

Preparation:
Pour the ingredients into a cocktail shaker with ice cubes. Shake well. Strain into a chilled cocktail glass.

Long Day On The Hill

Walk into many bars in Washington, D.C. and chances are someone’s drinking a Rickey. During the late 1800s, members of Congress would gather at Shoemaker’s Bar after a long day on the hill. Many nights they would find themselves joined by “Colonel Joe” Rickey, a lobbyist in Washington, D.C. who would add a dash of lime and soda water to his nightly bourbon, thus creating the Rickey. Today the drink is commonly known as the Gin Rickey, using gin instead of bourbon. On July 17, 2011, at the JW Marriott on Pennsylvania Avenue – the same spot on which Shoemaker’s Bar used to stand – the “Rickey” became the official drink of Washington, D.C.

Preparation:
Pour juice of lime and gin into a highball glass over ice cubes. Fill with carbonated water and stir. Add the wedge of lime and serve.

This signature cocktail, the Mississippi Punch, was originally created in the mid-1800s and it really packs a punch. The original recipe called for 8 ounces of liquor, but we chose the beginner’s version to share, which combines cognac, bourbon, and rum. Needless to say, this drink is definitely a slow-sipper. Jerry Thomas, the first celebrity bartender, created this cocktail and included it in his book, The Bon Vivant’s Companion, the first cocktail book ever published in the United States, proving that this Mississippi Punch certainly is a classic.

Preparation:
Combine all ingredients with ice and shake. Strain over fresh ice into a Collins glass.

Two-time Academy Award-winning film, The Wizard of Oz, tells the story of Dorothy and her dog Toto’s journey home to Kansas. As the first film ever shot in Technicolor processing, director Victor Fleming was able to bring to life the unusual characters and imaginative story line as Dorothy makes her way through the city of Oz. Seventy-two years later The Wizard of Oz still remains one of the top ten movies of all time, ultimately creating a momentous landmark in the motion picture industry.

Preparation:
Shake ingredients in a cocktail shaker with ice. Strain into an old-fashioned glass filled with ice.