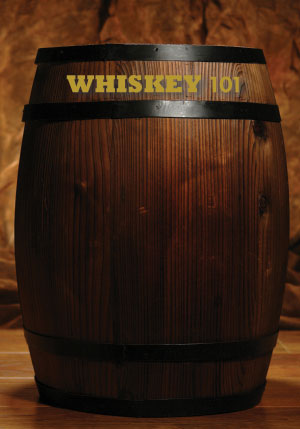 Whisk(e)y, from the ancient Gaelic word uisgebaugh (pronounced whees-geh-baw) meaning “water of life,” was probably first made in Eire in the 11th century. Whisky without the “e” represents the spirit made in Scotland and Canada, while whiskey with the “e” reflects the spirit made in the U.S. and Ireland. Other significant producing countries include Japan and India. For our general purposes, we will refer to it as whisky.

Whisky is the only spirit to be defined as having to be made exclusively from grain. Internationally it is defined as a spirit obtained from a fermented mash of grain, distilled at less than 190 proof (95% abv), stored in oak barrels, and bottled at no less than 80 proof (40% abv.) The five primary grains that form the basis of whisky are: barley, wheat, rye, oats, and corn. The choice of cereals is largely determined by the region where the cereal is most successfully grown and is one of the most significant determinants in the taste profile of whisky. The other significant determinants are: the source of water (which is far less relevant today given reverse osmosis technology and chemical additives that can duplicate any source), the type of still used, the number of distillations, the maturation method (aging in different types of barrels and length of aging), and the region in which it matures.

Barley needs to undergo the malting process for converting starches into fermentable sugars. During germination, the process is halted by kilning the graining. In Scotland, this is frequently done by combusting peat, which is compacted, decomposed vegetation traditionally used as a source of fire and heat. One popular misconception is that all Scotch whisky has peat smokiness, though it is true that many of its famous single malt brands reflect that distinctiveness.

One of the characteristic markers of the use of some unmalted barley is an almost leathery note on the palate.Scotland has the greatest number of operating distilleries, totaling more than 180. Scotch whisky is basically categorized into malt and blended whiskies, which are malt whiskies that are blended with other cereal distillates that are lighter and made in continuous stills. Blended whiskies such as Johnnie Walker, Dewar’s, J&B, and Cutty Sark represent 90% of all Scotches produced. There are 5 primary regions of Scotland reflecting certain distinctiveness: The Highlands, The Lowlands, Speyside, Campbeltown, and Islay. Single malts are double distilled and all must be aged at least 3 years, though they commonly have a minimum of 7 to 8 years of aging, and must be released at bottle strength of 40 to 46% alcohol by volume. Most distilleries add water not only prior to bottling but prior to casking, so that the local tap water is less in use at warehouses prior to bottling.

The exceptionally good distilleries release very limited cask strength whiskies of up to 6o% abv. An age statement requires reflecting the youngest whisky in the blend. Single malts must be made from malted barley from a single distillery, and made by the batch or pot still method. The climate is such that loss through evaporation –the angels’ share–is between .05% and 2% annually, versus 3% to 5% for bourbon. Most are aged in used American oak barrels that have already seen bourbon whiskey aging. These may be supplemented by barrels that have been used for aging white or red wines, sherry, port, or Madeira; or for cognac and calvados production.

One question that many consumers will ask a bartender or retailer is, what is a vatted malt? It is a whisky that is a blend made at more than a single distillery. A single malt is made not only of malted barley but also from a single distillery. Another question in consumer minds is why some whiskies become cloudy when in contact with ice or water, versus others that don’t. The reason is the ones that become hazy have not undergone a chill filtering process, which removes certain esters, and therefore flavor, but provides more aesthetic appeal. This is one reason many Scotch connoisseurs ask for a side of water and have their scotch neat.

The “peatiest” or smokiest malts are those from Islay, where only eight distilleries are now operating. These malts tend to have an almost briny, sea-like aroma; some examples are Ardberg, Bowmore, Lagavulin, or Laphroaig. Most neophytes to the whisky world will find it more difficult to appreciate this style if they are unfamiliar with Scotch.

In terms of taste profiles, it is risky to categorically state that all brands from one area have a certain taste profile, other than the smokiness of Islay, as they can be very distinctive. This is further complicated by the fact that within each brand, there are huge variations depending on aging lengths. That being said, Scotch whisky can be categorized as being fruity or floral on the nose; light or rich on the palate; or, smoky or delicate on the palate. For example, Glenfiddich 12-year old and Glenlivet 12-year old are light and delicate compared to Lagavulin 16-year old or Highland Park 12-year old, both of which are smoky and rich. Ardberg and Laphroaig are light but very smoky, in comparison.

For those who are unfamiliar with Scotch, I would suggest starting with a blended whisky and going through the process of discovering which style you prefer. You will find that enjoying it neat, and cutting the scotch with no more than 50% bottled water, will allow you to better discern the aromas and understand the subtle differences that exist.

Given the wide variations of style, it will take a lifetime of discovery before you can consider yourself a true connoisseur. As the old Scottish toast goes: “Freedom and whisky gang thegither-Tak aff your dram.”