This story was first featured in the Summer issue in 2010 and is worth a ReMix. There’s nothing quite like having a cocktail in a historic bar. It makes your mind wonder about who has visited this same place in the past.

There’s nothing quite like having a cocktail in a historic bar. It makes your mind wonder about who has visited this same place in the past. If you happen to be in Babcock & Story Bar in the Hotel Del Coronado, which opened in 1888, the imagination can conjure up the power brokers of the early 1900s deciding the fate of the great West over cocktails at the massive handmade mahogany bar; or the Navy pilots-in-training during World War II enjoying the high life before going off to war; or the movie stars…well, you get the picture.

We will take a look at a handful of these historic imbibing institutions, including the famous bar at the Silver Dollar Bar that has 2032 uncirculated 1921 Morgan silver dollars embedded in the bar surface! And one of my favorites in The Big Easy, The Carousel Bar, where the 25-seat bar rotates on 2,000 large steel rollers. And then there’s a bar with a signature drink called “Aspen Crud” – do you know the location? We will also visit a Seattle bar in a hotel built in 1927 that serves one of the world’s best martinis. So let’s turn some pages and study these bars, their history, and their signature drinks. After all, who can resist a good saloon!

Historic Hotels are found throughout the country. If you are considering staying at one of these fabulous institutions, please refer to the Historic Hotels of America National Trust for Historic Preservation website: www.historichotels.org.

When the Hotel del Coronado opened in 1888, it did so to great fanfare. The rambling Victorian masterpiece not only boasted a spectacular Pacific setting and the promise of endless California sunshine, it was equipped with every resort amenity – including a first-rate bar.

The spacious oceanfront gentleman’s bar, in typical Victorian fashion, adjoined an enormous men’s billiard room (no women allowed). When the grand opening took place in April of 1888, a San Diego newspaper reported that the hotel’s “Bar Room” was “undoubtedly the largest and most elegantly appointed saloon on the coast.”

The bar itself was unusual in design. Almost 50 feet long, it came to a 90-degree angle at one point and a 40-degree angle at another. Built by the Brunswick Company in Pennsylvania, also known for billiard tables, the magnificent mahogany bar was shipped, fully assembled, around Cape Horn.

An early brochure describes the “bar-counter” as: …forty-six feet in length, made of solid mahogany, highly polished. At an angle in this counter is the cashier’s desk, of new and peculiar design, a canopy resting on six pilasters over which appears a large, gilded metal crown, the elevation and location of the desk being such as to give the cashier full view of the entire room. The back counter of the bar is twelve feet in height, handsomely carved, and holding three immense mirrors.

The bar itself has been moved and modified a couple of times since 1888. At one point, possibly in the 1950s, the structure was cut in half and one portion was removed. Today, master craftsmen have restored the bar to its original dimensions and configuration, and it currently serves as the centerpiece for the oceanfront Babcock & Story Bar.

Getting Off to a Great Start: At the time the hotel was built, owners Babcock and Story had secured all liquor rights in Coronado so that no other businesses could serve alcoholic beverages. Early guest ledger reports indicate that the hotel served a variety of cocktails, including gin flip, cherry brandy, and whiskey sours.

The Well Never Ran Dry: Rumor has it that Prohibition didn’t dampen The Del’s spirits. Apparently, the hotel’s proximity to Mexico kept the bar well supplied.

World War II Watering Hole: The Del’s bar saw increased action during World War II, when the Navy housed many of its pilots-in-training at the hotel. The bar was so popular that fighter squadron yearbooks routinely included photos of military men enjoying the high life with their dates at The Del. The resort’s bar became such a San Diego hotspot that the hotel manager later admitted that bar receipts – and bar receipts alone – had kept The Del afloat during America’s impoverished war years. 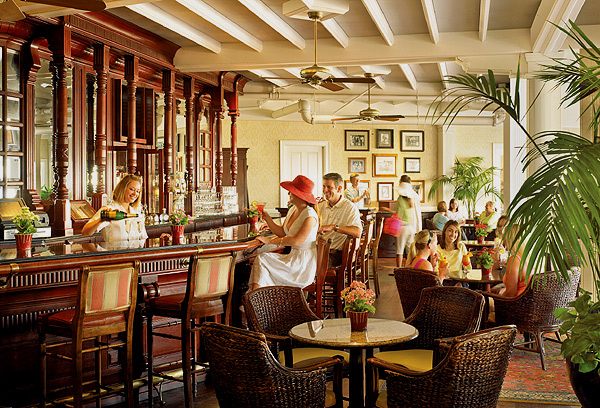 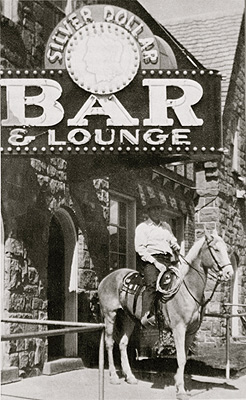 The Wort Hotel is an elegant hotel rich in history that thrives in the heart of Jackson Hole, Wyoming. Located one half-block from the historic town square, The Wort is steps from the best boutiques, museums, galleries, restaurants, and nightlife, which includes our own famous Silver Dollar Bar. Built in 1941, The Wort Hotel has retained its charm while providing luxury amenities and services that make it Jackson’s finest hotel. The Wort Hotel boasts 60 luxurious guest rooms furnished with lodge pole pine furniture, goose down comforters, western fabrics and décor, as well as our signature luxurious bathrobes and plush Silver Dollar Sam teddy bears.

The Silver Dollar Bar, located inside the historic Wort Hotel, has been a Jackson Hole institution for over 50 years. Famous for its 2,032 uncirculated 1921 Morgan silver dollars embedded in the bar surface, the venue was notorious in the early days of Jackson Hole as a gambling haven. When law enforcement cracked down, gambling moved underground while the bar above continued to host popular western acts including Willie Nelson, Sons of the Golden West, and Rusty Draper. That tradition continues today as live music can be heard at least three nights per week, including the local favorite Bluegrass Tuesdays. Adding to the experience is an affordable yet hearty menu with great specials to satisfy any taste. Moving well into the 21st century, this bit of the Old West continues to be the meeting point for generations of local businessmen, politicians, skiers, friends, and family. 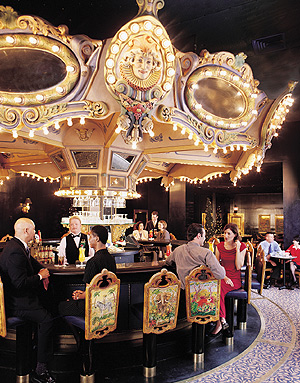 The Hotel Monteleone in New Orleans was established in 1886 by Antonio Monteleone, a count from Sicily, and it is currently owned by the fourth generation of the same family. This historic hotel has long been home to some of the city’s, and the world’s, most famous and colorful characters. Ernest Hemingway, Tennessee Williams, William Faulkner, and Truman Capote called it home, as have countless movie stars, dignitaries, and royalty. The Monteleone is an official Literary Landmark, one of only three
hotels in the country with this recognition.

The Hotel Monteleone is also on the official registry of haunted places! Hotel staff often hear ghost stories from guests, especially those who stay on the 14th floor (actually the 13th floor).

The Carousel Bar
The Carousel Bar inside the hotel overlooks famous Royal Street through large fan windows and has been a favorite of locals and tourists alike. It is the only bar in New Orleans that revolves around the room. Installed in 1949, the 25-seat bar turns on 2,000 large steel rollers, pulled by a chain powered by a one-quarter horsepower motor. While the bar always turns at the same speed, visitors who have imbibed for awhile often claim that the bartender turned up the motor’s speed! 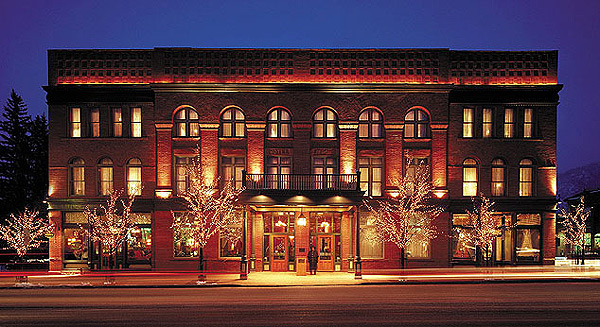 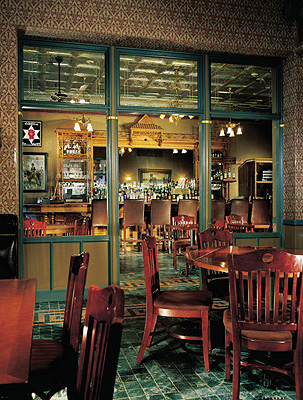 During the height of Colorado’s silver boom, Hotel Jerome was born from the vision of Jerome B. Wheeler, the co-owner of New York’s Macy’s department store. He built the hotel to emulate the great European hotels, such as London’s fabled Claridge’s, and to create an aura of cosmopolitan civility in the once raucous mining town. The grand hotel was considered a modern marvel – it was one of the first buildings west of the Mississippi River to be fully lit by electricity and it featured 90 guest rooms, 15 bathrooms, indoor plumbing, hot and cold water, steam heat, and an elevator

Today, Hotel Jerome is more than a place to stay – it’s a place to experience. Surrounded by the magnificence of the Rocky Mountains in the heart of Aspen, Hotel Jerome offers an elegant and relaxed ambience, impeccable service, unsurpassed accommodations, and exquisite dining. Each of the 94 richly appointed guestrooms and spacious suites provides a haven of comfort and sophistication. The hotel embodies the “balance of body, mind, and spirit” philosophy of Aspen. It is often said, “If you haven’t been to the Jerome, you haven’t been to Aspen.”

The J-Bar at Hotel Jerome has been Aspen’s favorite watering hole for well over a century. From the silver miners of the late 19th century to today’s A-list Hollywood actors, the J-Bar is a place of “good times and good drink.” J-Bar’s celebrated drink, the now infamous “Aspen Crud,” is steeped in the history of both Aspen and Hotel Jerome. Like many bars across America, the J-Bar was converted to a soda fountain during Prohibition, and this “milkshake with a kick” was invented around that time period. 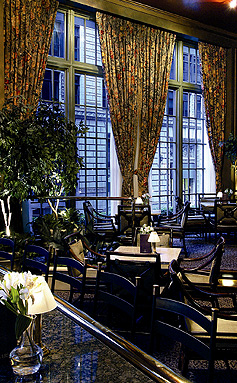 Ideally located in thriving downtown Seattle, the Mayflower Park Hotel is in the heart of the city. This classic hotel was built in 1927 and has been lovingly restored with crystal chandeliers, gleaming brass, and period antiques that offer an inviting European elegance.

Oliver’s Lounge was opened in 1976 and is located off the hotel lobby. It has grown to become one of Seattle’s favorite establishments and is home to the renowned International Martini Classic Challenge. Oliver’s holds the title for Seattle’s Best Classic and has won the titles for Best Specialty Martini and Best International Classic Martini.

During Prohibition, Oliver’s location was occupied by one of the city’s first Bartell Drug Stores. In 1933, a company that would later be known as Westin (Western International) bought the hotel and later put in the lounge that was to become one of Seattle’s favorite night spots. This original lounge, named The Carousel Room, had a circus theme, complete with antique carousel horses. Today in Oliver’s, you can relax to the sounds of contemporary jazz and the sights of the bustling city, while enjoying delicious light meals and your favorite beverages.

Food and Beverage Manager, Steve Johansson, gave the history of Oliver’s Classic Martini. “A funny thing happened during our pursuit of the perfect Classic Martini. Restaurants and hotel lounges around Seattle joined in a friendly competition known as the Seattle Martini Classic Challenge. Then Vancouver, B.C. joined the mix, taking the competition international. The winner, when all was said and done? Oliver’s – eight times over.”

The recipes sprinkled throughout this article and other delicious drinks recipes can be found in our Celebrity Recipes section.